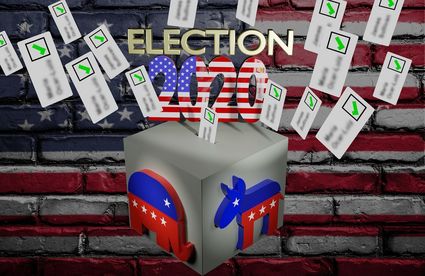 Blue, Schmoo. Not in this county.

It was another clean sweep for the Republican Red team headed by President Donald Trump, who won 81% of Orange County's votes in his reelection bid for 2020.

A total of 29,170 county votes were cast for the Republican candidate who shocked the world with his Electoral College win in 2016, versus just 6,534 votes (or 18.2%) for Democrat Joe Biden, with Libertarian and Green candidates getting the remaining 0.8%.

Overall, Orange County beat 2016's record turnout with a total of 36,058 turning in ballots. Less than one in five came on Election Day, with a record 30,550 votes cast in early voting.

Trump's Orange County margin was a slight improvement on 2016 when Trump won 79.4% of the Orange County vote to 17.9% for Democrat Hillary Clinton.

U.S. Representative Brian Babin won another term in Washington Tuesday by the largest margin of any local contestant in a contested rate.

Two incumbents were defeated and lost their seats on the Orange County Drainage District Board of Directors.

All other local incumbents won their races.

In the only contested race for Bridge City council, incumbent Mike Reed won with 64.5% against challenger Kenneth Prosperie.

Dan Mohon, a mid-term appointee, won his first election as Pinehurst mayor after serving two terms as Orange mayor in the last century. He won 64.4% of the 689 ballots cast in his race versus newcomer Troy Pierce.

The only contested race in Orangefield's school district saw former trustee Jude Graffagnino qualify to rejoin the board with 79.1% of the votes cast in a race against Juan Gonzales.