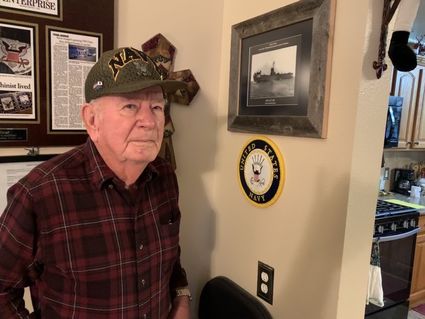 Cedric Stout, a World War II veteran who survived the sinking of the USS Utah when the Japanese attacked Pearl Harbor on Dec. 7, 1942, turns 99 on Saturday.

As someone who survived the bombing of Pearl Harbor, Bridge City's Cedric Stout isn't too concerned by the coronavirus.

Stout, who will celebrate his 99th birthday Saturday, decided to go to his favorite lunch spot Monday only to discover it was not yet open for indoor dining.

"I think it's hooey," he said. "All these other places are letting you in."

Stout, an Opelousas, Louisiana native whose nine children attended Bridge City schools while he worked 53 years as a store-to-store salesman for a Port Arthur pharmacy wholesaler, says he's known people who "had the flu [COVID-19] and stayed sick three or four weeks."

But he's healthy as any person 98 years, 11 months and four weeks old can be.

Maybe it's because he keeps busy.

After lunch Monday, he mowed his lawn on a good-sized corner lot. He marveled at how clean his ditches were after the trucks made a second run to pick up the last of the tree limbs he had gathered and stacked there after Hurricane Laura and Tropical Storm Delta.

And he entertained a guest inside his sun room and watched birds take turns at the feeder outside the window.

With his second wife Cherry, he looked forward to the big family birthday party and get-together this weekend featuring most of his kids and grandkids.

Tuesday's Election Day was no bother for Stout. He voted by mail weeks ago.

"I got a letter through the mail to vote, so I did," he said.

If he's got a problem with the Post Office now, it's the mailbox bombardment he's getting from insurance companies wanting to sell him Medicare supplement policies because this is the annual two-month open enrollment period and, well, sell is what insurance companies do.

As for the assault on "normal" that 2020 has become, what with COVID-19 shutting down schools, restaurants and other businesses, and daily election-based drama, Stout focuses on stuff he's had lots of experience with.

"The weather's pretty hard to predict," he said. "The last two storms we had were pretty rough. They broke off a bunch of branches and everything else."

For him, it appears the key to living 99 years is a) surviving Pearl Harbor; and b) clean living. Maybe a good battery.

After basic training near San Francisco, the machinist went by transport ship to Pearl Harbor, near Honolulu, Hawaii, and stationed aboard the USS Utah, a steam-powered battleship first launched in 1909 and used in the 1914 occupation of Veracruz during the Mexican Revolution.

During World War I, it was based in Ireland and was used to protect convoys from German surface attack. Beginning in the 1930s, the Utah was used for training anti-aircraft gunners and as a target ship for dummy bomb drops.

It was one of the first ships struck by the Japanese in the Dec. 7, 1941 early morning attack that killed more than 2,300 military personnel and pushed the United States into World War II.

USS Utah was struck by two torpedos dropped from Japanese torpedo bombers and rolled over and sunk in seven minutes. Fifty-eight crewmen went down with the ship, while 461 survived, according to the U.S. Navy.

"That was a close shave in Pearl Harbor," Stout says with an audible sigh.

"I missed a bullet over my hair by, well, it probably took two or three hairs off the top of my head. I was looking through the porthole. I thought they were having a lot of fun on the beach and when I pushed my head through the porthole, that bullet came, 'Zoom!' 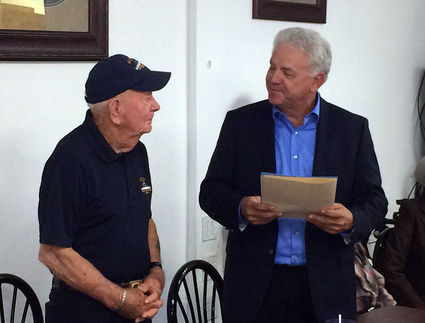 "Fun, my butt. I said, 'There ain't no more fun up there.' They were dropping those bombs all over the place."

Stout was one of many crewmen who escaped the ship and took cover ashore. He wasn't injured in the attack, nor during the nearly four-year duration of the war he spent on the Pacific Ocean working in the engine rooms of a variety of US Navy ships.

From growing up on his daddy's farm in Louisiana during the Depression with six brothers and five sisters scratching out a living in the fields when "life was a struggle," Stout has come a long way to the warm afternoons watching the birds coming to his window for a snack.

For the last 15 years, he says, a Pacemaker for his heart has accompanied him.

"I went to the doctor a while back to have it checked out," Stout said, "and the doctor said, 'This original battery is good for another three years.'"

Bet on Stout to outlive it.