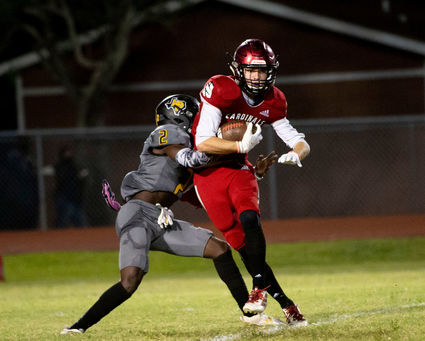 The Orangefield Bobcats did what they had to do to escape with a 20-13 overtime win against Hamshire-Fannett this past Friday night, while Bridge City and Little Cypress-Mauriceville each took a loss with just one week left to play in the regular season.

The Cardinals fell in a close 15-12 decision against Liberty, while LC-M lost a nail-biter to Livingston 18-6. Bridge City faces its toughest nemesis this Friday with a game against West Orange-Stark, which had this past Friday night off. The 1-6 Bears finish up the season with a 7 p.m. home game against Splendora.

There's one week left in the regular season and one thing is still for sure ... the West Orange-Stark Mustangs are the champions of District 11-4A, Division II.

The Mustangs are a perfect 5-0 in district going into this week's game against cross-county rival Bridge City. The Cardinals are playing for respect with just one district win to their credit in six tries.

Silsbee, which has a much-needed bye week this week, is 6-2 in league play with Orangefield sneaking up behind the Tigers after a 20-13 overtime win over Hamshire-Fannett this past Friday night. The Tigers finished their regular-season run with a big 56-21 domination of Hardin-Jefferson, dropping the Hawks to 4-4 in district play. That district won-loss record ties H-J with Liberty, which hosts H-F this Friday.

Even with a week off, West Orange-Stark's Jerren Terrell still leads the district in passing with 1,045 yards, completing 59 of 115 attempts with 12 touchdowns and three interceptions. Closest to him is H-F's D'onte Zeno with 65 completions on 119 attempts for 968 yards. He has six TDs but also 12 interceptions this year.

Expect to see an aerial display between BC and WO-S this Friday as Cardinals QB Ethan Oceguera is third in the district in passing with 54 completions on 121 attempts for 820 yards with eight touchdowns and five interceptions.

WO-S receiver Jalen Thompson leads the district with 370 yards and seven touchdowns on 16 catches, while BC's Austin Richardson has 11 catches for a district second-best mark of 329 yards and five TDs.

Silsbee Antonis Arline defines the blue-collar running back, running a district-high 123 times for 666 yards, averaging 5.4 yards a carry. He has five touchdowns. H-J's Jaiden Porter is second with 617 yards on 97 carries, while Orangefield's Hunter Ashworth has collected 551 yards on 116 carries with four TDs.

The Orangefield tandem of Tyler Washington and Tyler Shearin are tops in the district with four interceptions apiece, while Silsbee's Kevin Martin and Rueben Hatton each have three picks apiece this season.

The Mustangs are enjoying the senior season of kicker Angel Ibarra, the top-scoring kicker of the district with 48 points, including five field goals and 33 extra-point boots. Ibarra is the third-ranked scoring player in the district behind H-F Kheagian Heckaman's 64 points and H-J Jaiden Porter's 62 points.

In spite of a first-half offensive struggle, the Orangefield Bobcats came through late, taking a 20-13 overtime win over Hamshire-Fannett in District 11-4A, Division II play this past Friday night. The win clinches a postseason berth for the Bobcats.

That sets up the Bobcats with a showdown with Hardin-Jefferson this Friday night. The winner of that game will take third place in the district, while the loser finished fourth in league play.

After trailing 7-0 heading into the second half, Orangefield found its offensive heartbeat, moving 67 yards for a 7-7 tie at the 4:35 mark in the third quarter. After working its way to the Hamshire-Fannett 26, the Cats faced a fourth-and-five. Faking the handoff, Orangefield quarterback Gunner Jones tossed the ball to Mason Sampson for the TD and tie game.

The Longhorns responded almost immediately, taking a 13-7 lead after a blocked extra-point kick with eight seconds left in the quarter.

The Bobcats needed a TD to stay alive and took care of business with a 66-yard drive that ended with a one-yard plunge by Jones with 3:14 left. The extra-point kick, which could have been the winning point, was off mark, leading to the overtime play.

Once again, this time in OT, the Bobcats opted for the dramatic. After winning the coin toss and choosing to receive the ball in overtime, the Cats faced a fourth-and-nine on the H-F 24-yard line. Jones completed a pass to Tyler Washington for the touchdown. The Bobcats' defense did their job as H-F attempted to score on their offensive overtime opportunity and Orangefield walked away the winner.

Jones completed 4 of 9 passing attempts for 78 yards with Davis adding 54 yards on the ground. Ashworth had 50 yards rushing for the Cats.

The Cardinals opened the scoring on a 67-yard, 10-play drive that gave them a 6-0 advantage thanks to a fourth-and-2 four-yard run by JimSharon Bearden in the first quarter. A two-point conversion failed, leaving the Cards up six.

The Panthers matched that 67-yard drive with one of their own, driving down to the Cardinals 3 where Liberty went up 7-6.

The Cardinals took the lead once again 12-7 in the third quarter after driving 77 yards on 10 plays. BC quarterback Ethan Oceguera found Austin Richardson on the right side for 37 yards and and the touchdown to re-take the lead.

The Panthers came right back, though, scoring on an 11-play, 75-yard drive. With the two-point conversion, Liberty had the margin it needed to take the win.

Oceguera completed 3 of 7 passes for 109 yards with his top receiver Richardson grabbing two catches for 78 yards and a touchdown. Bearden led the Cardinals' running game with 71 yards on 20 carries.

The Livingston Lions are one of the top teams in District 10-4A, Division I. This past Friday night, the Little Cypress-Mauriceville Bears played like they were among the best as well.

Trailing 12-0 at the half, the Bears made a game of it when quarterback Ashton Landry found receiver Brendon Pollock for a huge 79-yard touchdown strike, cutting the lead to just one score at 12-6.

It wouldn't take long, though, for Livingston to answer with a 59-yard rushing TD to ice the game and set up the Lions for a final-week showdown for first place against Huffman Hargrave. 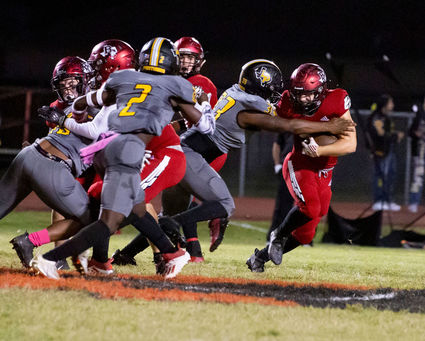 In spite of the loss to Livingston, the Bears are still in a position to make a postseason run if they can find a win over Splendora this Friday night.