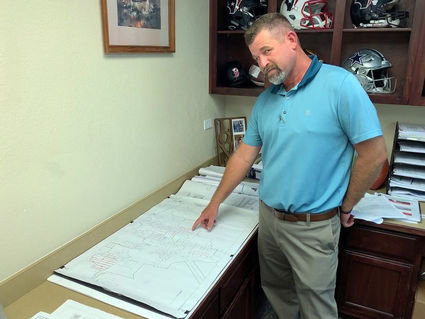 Mike Lund, Bridge City's water department manager, points to a map and the location of one of the city's planned locations for two new water wells.

It's water, water everywhere if you live in Bridge City, the city of bridges, and the city of Bridge City is busy making sure its citizens have plenty coming out of their faucets for years to come.

Currently, the city is replacing two of its four water wells in projects that will cost a total of $7 million dollars, money expected to come from federal grants.

"We've got plenty of water. Now, the actual pumping capacity we need, we don't have that. We'll get that with the third well. Then we'll put the fourth well in and that will take care of the city for probably four years."

Bridge City, with just under 4,000 residential water customers, had four wells and routinely operated three of them, one they call "Romero," a second "408" named after their street location, and two at City Hall on Rachal Street.

The Romero well was found several years ago to have a leak that allowed saltwater into the pipes. It was believed repaired by putting a new concrete casing in the well.

But saltwater still got in, so the well has been capped.

While Romero has been unavailable for most of the past five years, the city has been operating on two wells, the 408 well and one of the two at City Hall.

The second City Hall well has been the backup and used once a month to flush out drainage ditches.

But an incident in August changed that.

"The well at 408, the motor seized up. It was probably hit by lightning," Jones said. "So when that pump went out, we decided to run the second well out here [at City Hall]."

"When something like that electrical surge at 408 occurs, we immediately run this one [the City Hall backup] to flush the system," explained Mike Lund, the city's Water Department manager. "We couldn't get anything out of it.

"It collapsed," Jones said, picking up the story of the second City Hall well. "So we're going to cap it."

The immediate solution was to get a new motor for the 408 well and it is running smoothly now.

But to quench the city's water needs, replacement wells will be drilled at the site of the Sunnyside water tower, which already has a 500,000-gallon elevated tank but no well, and a new site where the Sims Elementary school once stood.

Jones said the city is negotiating a land swap with the school district for the Sims property.

The city had hoped to use an already obtained Community Development Block Grant to build the new well at Sunnyside but discovered the project was ineligible for that grant.

"Basically, we had the money in a grant to drill a well at Sunnyside, but that money is tied to low to moderate income areas, so we can't put it at Sunnyside," Jones said. 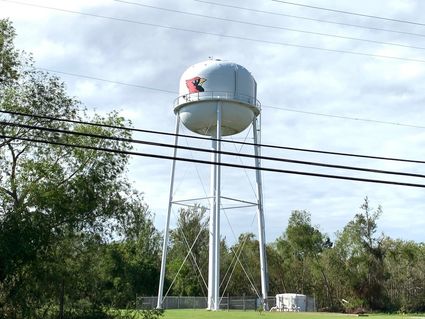 The elevated storage tank at Bridge City's 408 well site is hard to miss as you travel down FM 408 between Bridge City and Orangefield.

"So we're now transferring that money and drilling a well – we've got to have one immediately – at the old Sims school.

The city has applied for a Hurricane Harvey mitigation grant to pay for the rest of its wish list.

"We applied for a grant the other night that would be to put another $500,000 tank at the Sims property and drill an additional well at Sunnyside," Jones said.

Besides the well work, Bridge City is in the process of replacing 41 of its 400-plus fire hydrants.

"We'll have some outages around town as we replace those hydrants. We'll get it out to everybody, and notify the state as well," Lund said.

"When your city is growing like ours, you're going to have some growing pains, but it's all bearable.