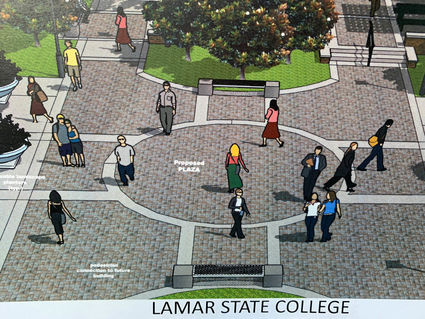 If Lamar State College Orange's footprint gets any bigger, it'll give Sasquatch a run for its money.

Tuesday morning, the two-year school and skills trainer in downtown Orange gained use of a block-long strip of 4th Street to help create a pedestrian walkway and plaza bisecting the campus from east to west.

It will connect LSCO's newest addition, a not-yet begun 58,000-square foot academic building, on 5th Street and Green Avenue, to the Shahan Center, located on Green and 1st.

"It will be good for the City of Orange so we can have events down there," Dr. Thomas Johnson, LSCO president, said during a presentation for Orange City Council.

"We're going to expand our footprint but in a way that's exciting. I hope this group will agree with me that Orange's brightest days are in the future."

City Council voted unanimously to approve the first reading of an ordinance that would abandon only surface use of 4th Street between Green and Main. The city retains a utility easement.

"And if they find oil under there, we get that, too," Orange Mayor Larry Spears, Jr., joked.

Architect Dohn LaBiche accompanied the LSCO president to the Council Chambers, which are located on the south end of the Orange Public Library while the former Capital One bank, site of the new education building, is on the north side of the library.

LSCO is set to begin demolition of the 14,600-square foot bank building next week. Capital One sold the glass building and its 1.6-acre lot to LSCO last year at a fraction of the appraised value.

The new classroom building, intended to replace the old Academic Building that was the college's first downtown building, will extend almost all the way to Green Avenue and what was its drive-through bank will become a plaza.

"We want to create space for students to gather," LaBiche said as council members thumbed through a dozen-page handout of plans by landscape architects.

They include plans for "gathering spaces" with benches topped with "alligator-skin shade structures" in tribute to the college's Gator mascot. The benches will also have USB and electrical charging stations.

The college's 4th Street entry sign, currently "Lamar State College Orange" engraved in stone atop a colorful flower bed at 4th and Green, will be embellished with a 12-foot by 4-foot video graphics and message screen. 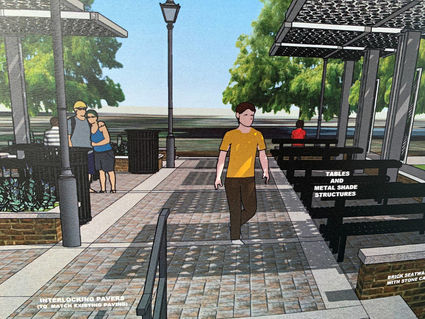 In other business at Tuesday's council meeting, the city OK'd its Economic Development Corporation's incentives of $50,000 for Tropical Vibes Daiquiries on 10th and Burton and $195,000 for Golden Chick, going in next to McDonalds on N. 16th Street.

Golden Chick is investing $1.1 million with plans to hire up to 22 employees.

Council members also approved a final plat for the Cypresswood Village Phase II subdivision on FM 105 near Texas 87. The development, which is pending approval of its drainage plans by the Orange County Drainage District, will have 41 homes priced at $180,000 and up.

The city also agreed to multi-year lease-purchase agreements for a vactor truck and a street sweeper, "part of our our new Litterforce program to get this city clean," Spears said.

Council voted to cancel its Nov. 24 and Dec. 22 meetings because of the holidays.