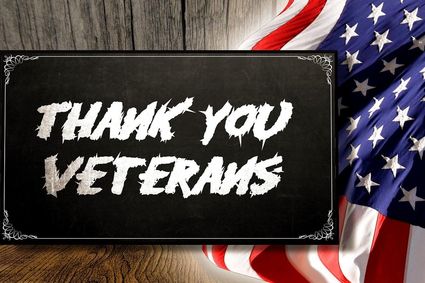 Since the occasion first began as "Armistice Day" in 1919 to acknowledge the end of World War I on Nov. 11, 1918, Veterans Day, so renamed in 1954, has been a special day to remember veterans of all wars, both living and deceased.

The country observes a moment of silence at 11 a.m. each year.

Orange County men and women have always done their patriotic duty when their country called. While the last of the World War I veterans have passed, Orange County has nearly 20 living World War II veterans.

These are people who for nearly 80 years have been walking and living among us, testaments to the sacrifices required to make our nation great.

J.B. ARRINGTON, 95, U.S. Navy, Orange: The owner of Orange's J.B.'s Barbecue restaurant sailed both the Atlantic and Pacific Oceans. He patrolled for German U-boat (submarines) and performed sea rescue operations. By the time the Americans landed in France on D-Day, June 6, 1944, Arrington had been transferred to the Pacific to help turn back the Japanese.

ATHANASE "Junior" BENOIT, 92, U.S. Navy, Merchant Marines, Bridge City: Benoit forged his father's signature on a lie about his age to enlist in the U.S. Navy at age 14 but was discovered and dismissed before shipping overseas. The 16th of 17 siblings from Gueydan, Louisiana, returned from California to Port Arthur, where he became a Merchant Marine, crewing on ship shuttling fuel and supplies from the Caribbean to Europe.

JOSEPH BERGERON, 93, U.S. Army, Orange: This graduate of the Prairie View School in what is now Bridge City, was in California for basic training in 1945 when the Americans detonated nuclear bombs over Japan, ending hostilities of World War II. He spent the next two years in Germany, as a driver for a staff officer.

BILL CONWAY, 92, U.S. Marines, Orange: Like Joe Bergeron, Conway was in basic training in 1945 when World War II came to an end. Instead of fighting, he sailed to China for some post-war guard duty and reconstruction work. He made the military his life, enlisting in the Army for the Korean War, and becoming a combat engineer; serving with the Navy Seabees building roads in Vietnam in 1968-69.

J.D. DIXSON, 96, U.S. Marines, Orange: Served from 1944-45 in the Pacific, seeing action in Guam and Okinawa. Calls himself "Lucky." "I ran over a landmine in a Jeep. It exploded right behind me. I couldn't see and drove right over a bluff. I got out and was about 15 feet away when the first shell went over me. It had a direct hit on the Jeep."

RAY FONTENOT, 99, Orange, U.S. Army Air Corps – Trained as a belly gunner on a bomber and was enjoying his final furlough with his wife before shipping out overseas. The couple was watching a movie when word came the war was over. "Everybody was hooping and hollering, and dancing and drinking," he said.

MAURICE FOURNET, 97, Mauriceville, U.S. Army Air Corps – An aerial gunnery instructor at Harlingen Army Airfield for three years, the Louisiana native and Port Neches High grad re-enlisted in the Air Force Reserve during the Korean Conflict but was not called up. He used his GI bill to collect degrees in mechanical and electrical engineering, then founded Beaumont's Matrix Engineering.

EUGENE GOUDEAU, 96, Orange, U.S. Navy – The son of an Orange sawmill worker signed up in 1942 and spent three years as a 5-inch gunner on the USS Dyson. The Fletcher-class destroyer built in Orange took part in 27 sea combat battles in the Pacific Theater during Goudeau's time aboard ship.

ED HYATT, 98, Orange, U.S. Army: A transplant from Louisiana and Arkansas, Hyatt graduated from LSU and was a lieutenant in an artillery company when he shipped out to England late in 1944. He was commanding 105-mm howitzers in the 43rd Tank Battalion attached to General George Patton's Third Army as the Allies fought their way into Germany to bring an end to WWII.

ROY McDANIEL, 96, Orange, U.S. Army – The Louisiana native never saw combat in his tour, 1943-46, spending much of his time in California. He moved to Orange in 1946 and worked for Chemical Row plants for 45 years.

BURDETTE OLDBURY SR., 93, Mauriceville, U.S. Navy – For two weeks in December 1944, in the Leyte Gulf, Philippines, the crew of the destroyer USS Reid was called to battle stations 10 times a day. Finally, on Dec. 11, 1944, after an attack by a dozen Japanese planes and the shooting down of seven of those planes, the Reid was sunk. Oldbury was among 150 members of the 253-member crew that was pulled from the Pacific Ocean. The Vidor native has been a carpenter and cabinet maker in Mauriceville since 1946.

JOHN M. PITTMAN, 94, Bridge City, Army – The infantryman reached France 6 months after D-Day and was wounded in March of 1945. The central Texas native rejoined his unit after the German surrender and served as part of the Honor Guard for U.S. Gen Mark Clark in Germany until mid-1946.

ROBERT ROTHROCK, 94, Orange, Navy – The Fort Worth native spent three years in the Pacific aboard the troop ship USS American Legion, a converted ocean liner. The ship put Marines on beach in Guadalcanal, Iwo Jima, and the Solomon Islands.

PAUL A. ROY JR., 93, Orange, Navy – Joining the fight in the Pacific in 1945, Paul worked in supply at a Naval Air Base on Eniwetok in the Marshall Islands. His squad helped put together one of the first Cold War atomic bomb tests.

STANLEY SIMON, 99, Orangefield, Army – A 1940 enlistee, this Orangefield native was a staff sergeant with the 60th Antiaircraft Artillery Division when he landed during the 1944 D-Day invasion. After helping liberate France, he was wounded at the Battle of the Bulge, the final major battle in Europe, suffering frostbite and wounds from an explosion that gave him blurred vision and permanent hearing loss.

CEDRIC STOUT, 99, Bridge City, Navy – A Pearl Harbor survivor, having been one of the fortunate surviving crew members of the USS Utah, sunk on Dec. 7, 1941 by the Japanese attack on the Hawaiian naval base that plunged the U.S. into World War II. Stout spent the rest of the war as an engine mechanic on a number of destroyers and smaller ships.

If you know a living World War II veteran from Orange County who should be on this list, please contact Dave Rogers at [email protected] or call 409-886-7183. Also, we are starting similar lists for living Korean War and Vietnam War veterans in Orange County. Email or call us.