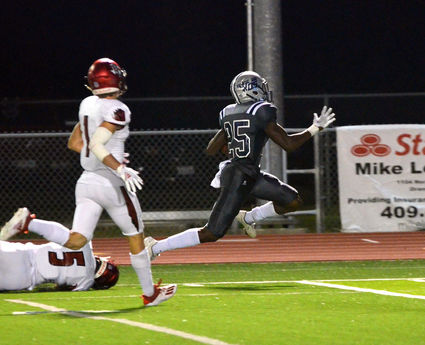 Mustang Jamaal Shaw scores on the fourth play of the game with a 40 yard run around the left side. Shaw finished the game with 69 total yards and the Mustangs won, 52-0.

The West Orange-Stark Mustangs are the undefeated champions of District 11-4A, Division II after a dominating win against Bridge City this past Friday night.

Now, the Mustangs head to the playoffs with a Region III bidistrict game against Sweeny this Friday in New Caney.

Orangefield gets into the playoffs with a 4-4 overall record and 3-3 mark in 11-4A play, putting them in fourth place in the league in spite of a double-overtime loss to Hardin-Jefferson this past Friday. With their loss to WO-S, the Cardinals end their season 1-6 and 1-5.

The Bobcats will take on the Sealy Tigers this Friday in the Class 4A, Region III bidistrict round. The game will kick off at 7:30 p.m. at Huffman High School.

Little Cypress-Mauriceville ended its season with a 30-0 loss to Sealy as the Wildcats advance as the fourth-place team from District 10-4A, Division I.

The West Orange-Stark Mustangs, with their win over Silsbee earlier this season, are the undisputed district champions in 2020.

The Mustangs finish the regular season 6-0 in district play with Silsbee one game behind at 5-1. Hardin-Jefferson, thanks to a double-overtime win over Orangefield this past Friday, is the third-place team in district with a 4-2 record. Orangefield is 3-3 in league play. All four advance this week to the Class 4A, Region II playoffs.

If there's an early nod for district MVP, you could easily argue for WO-S senior quarterback Jarren Terrell. He finished the season with 1,226 yards passing, completing 54 percent of his passes, 72 of 133, with 15 touchdowns and just three interceptions.

Not surprising, Mustang Jalen Thompson is the top-yardage receiver with 414 yards and eight touchdowns. Bridge City's Austin Richardson is second-best in the district this year with 329 yards on 11 catches with five TDs.

Hardin-Jefferson's senior running back Jaiden Porter is the top ball carrier with 707 yards and 11 touchdowns on 115 carries, while Hamshire-Fannett junior Khegian Heckaman carried the ball 124 times for 671 yards and 11 TDs.

Mustang junior Elijah Gales was one of the top rushers, averaging 10.1 yards per carry, finishing the regular season with 497 yards on 49 carries. The only ball-carrier to average more than 100 yards a game this district season was Silsbee's Antonis Arline. He finished with 123 carries for 666 yards and five touchdowns.

The Mustangs' Angel Ibarra finished as the top kicker in the district and the third overall top scorer in the league after scoring 56 points. He was successful on 38 extra point kicks and six field goals.

If there was ever any doubt, it has been more than settled.

The West Orange-Stark Mustangs finished the 2020 regular season with a perfect 7-0 overall record, 6-0 in District 11-4A, Division II play after a 52-0 walloping of Bridge City this past Friday at Hooks Stadium.

With the win, the Mustangs head to the playoffs with a bidistrict round game against Sweeny this Friday at 7:30 p.m. at Reed Stadium in New Caney.

The Mustangs collected 400 yards of total offense against the Cardinals who managed just 35 yards of their own in their final game of the season. BC finishes the year 1-6 overall and 1-5 in district play.

The WO-S running backs combined for 212 yards with Jayson Zeigler Jr. collecting 66 yards on five carries with two touchdown carries. Jamaal Shaw added 40 yards on a touchdown run in his only carry of the game.

It was quarterback Jarren Terrell who dominated, completing 13 of 18 passes for 181 yards and three touchdowns. His top receiver was Zeigler with 57 yards on four catches with two TDs, while Jalen Thompson added 44 yards on two catches with a touchdown.

The Mustangs got up quick on the Cardinals, taking a 21-0 first-quarter lead, adding seven more in the second quarter for a 28-0 halftime advantage. With 10 points in the third quarter and 14 more in the fourth, the Mustangs added 24 second-half points for the 52-point win.

The scoring got underway when Shaw took off on a 40-yard touchdown run, capping a four-play, 63-yard drive on the opening possession of the game.

Terrell hit Zeigler for a 41-yard scoring strike with 7:26 left in the first quarter for the 14-0 lead as they successfully ended another four-play drive that went 53 yards.

The third touchdown of the first quarter came with 4:10 left on the clock when Elijah Gales finished off a four-play, 27-yard drive with a 6-yard TD run.

The second quarter saw Terrell connect with Thompson on a 36-yard pass-and-catch TD that ended an impressive 78-yard, six-play drive at 4:37 left in the half.

Angel Ibarra, one of the top-scoring players in the district, booted a 31-yard field goal in the third quarter for a 31-0 lead for the Mustangs with 7:58 left. Terrell found Zeigler for another TD with about five minutes left in the third, capitalizing on a Bridge City turnover for a 4-yard touchdown.

In a game that would decide who would represent District 11-4A, Division II as the third and fourth place teams, it was Hardin-Jefferson that outlasted Orangefield for a 19-13 double-overtime win this past Friday night in Orangefield.

It appeared the Bobcats were poised to dominate the Hawks in the final regular-season game as they took a first-half 7-0 lead. The Cats's offense defined tedious in a 16-play drive that would end with a 1-yard run by Hunter Ashworth for the seven-point advantage with 4:39 left in the first half.

After a scoreless third quarter, the Bobcats added another touchdown with 10:34 left in the game when Ashworth crossed the goal line from the 4. A missed extra-point kick left the Bobcats up 13-0.

The Hawks finally found their offense, scoring a touchdown with 3:30 left in the game to cut the Orangefield lead to 13-7.

Hardin-Jefferson added another touchdown late and a heroic effort by the Orangefield defense resulted in a blocked extra-point kick and a tie game that would eventually send the contest into overtime.

With no score in the first OT, it would be the Hawks who would find the end zone in the second extra period as they bulled in from the 1 to take victory. 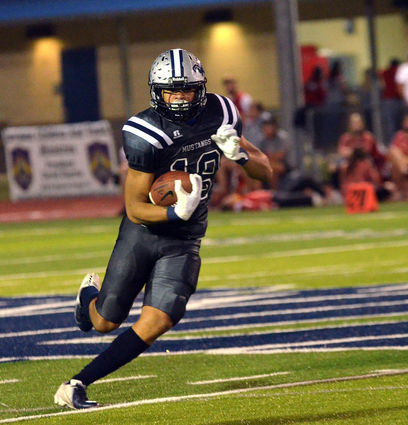 Pushing his way through the Bridge City defense, junior Jayson Zeigler gains yardage early in the game. Zeigler had three touchdowns in the 52-0 win over the Cardinals.

Ashworth finished with 85 yards on 17 carries, while teammate Dwight Davis had 83 yards on 15 carries.

With a glimmer of hope still remaining for Little Cypress-Mauriceville, it was Splendora that would dash the Bears' dreams of a postseason berth after taking a 30-0 District 10-4A, Division I win this past Friday night at Battlin' Bears Stadium.

The fourth-place spot in the district was at stake as the Bears and Wildcats teed off against one another. The Cats finish the regular season 4-6 overall and 2-3 in league play while the Bears end their year 1-7 and 1-4.

It was turnovers, both fumbles and an interception, that would doom the Bears to defeat as the Wildcats converted those mishaps into points throughout the night.