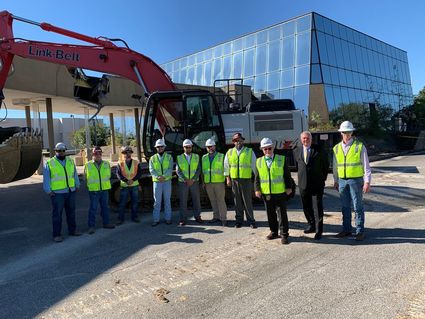 LSCO President Dr. Michael Johnson, third from right, and architect Dohn LaBiche, second from right, are flanked by workers from H.B. Neild & Sons Construction Tuesday morning after Johnson manned the excavator to start the demolition of the former Capital One Bank in Orange to make room for school construction.

The green bow tie may have tipped off onlookers that this wasn't your normal heavy machine operator about to tear into the roof over the deserted bank drive-thru teller structurer in downtown Orange Tuesday morning.

And there was a twinkle in his eye when he climbed down from the big excavator after ripping the first chunk off the structure that will be cleared away to make room for a new pedestrian plaza at Lamar State College Orange.

"That was a lot of fun," Dr. Thomas Johnson told a crowd of news reporters, students and invited guests. "This is all a part of our 10-year master plan. And this is a ray of sunshine in a very dark year."

The master plan, which will be presented to the Texas State University System Board of Regents later this month, includes a new Academic Center and plaza connecting the current campus to the block of Green Avenue between 4th and 5th streets, where the former Capital One Bank Building stands.

LSCO purchased the glass building in September 2019 with appropriated funds at a fraction of its appraised value. The building has been vacant for more than a decade.

The first phase of the college's plan, which should take about six months to complete, includes removing the drive-thru teller section of the building as well as starting on the plaza section. Infrastructure work will be done as well to prepare for the new building, which will be constructed at a later date.

Johnson said that while no plans had been commissioned for the new Academic Center that it was estimated that it would cost about $40 million, which will be sought from the state Legislature, which meets in Austin next year and every odd-numbered year to decide on Texas' biennial state budget, which includes capital projects at state colleges and universities.

A new Academic Center will replace the current one on Front Street, first built in 1908.

"That building is 112 years old and has been a store, a bowling alley and now an academic center, which it was never designed for," Johnson said. 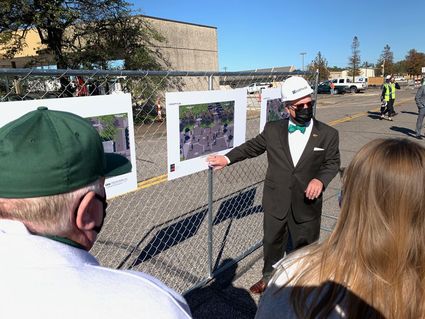 Dr. Thomas Johnson, president of Lamar State College Orange, explains plans for a new pedestrian walkway Tuesday morning after he helped make way for the project by climbing into a contractor's excavator and using its grapple bucket to do some demolition.

"We are growing at Lamar State College Orange and everyone is excited about this. We've had an increase in enrollment and we want to provide a state-of-the-art school for our students to learn in. Our students deserve a wonderful environment for their education and we are moving one step closer to our vision for that."

Johnson, a retired Houston police officer whose second career has been education, had never driven construction equipment before Tuesday. But he learned the required steps quickly under the supervision of H.B. Neild & Sons Construction and project management employees.

The LaBiche Architecture Group is heading up LSCO's expansion project and the City of Orange allowed the college to annex a portion of 4th Street to extend a walkway from one end of the campus to the other.

Johnson said he hopes the citizens of Orange come enjoy the campus when the project is complete.

"Our mission at Lamar State College Orange is to transform lives and the future is bright, Orange," he said.