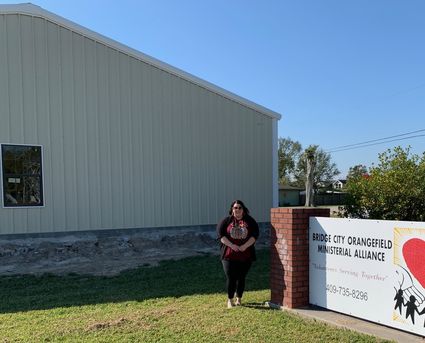 The Bridge City/Orangefield Ministerial Alliance, a non-profit agency offering food assistance and help with living expenses, has replaced its headquarters with a building 3.5 times as large and Melissa Isaacs, executive director, is thrilled.

In its third decade of operation, few Orange County social service operations have been as appreciated as the Bridge City/Orangefield Ministerial Alliance.

But 2020 has tested everyone's reserve and so the agency with a lengthy record of fulfilling unmet community needs found itself in a time of want.

The non-profit that provides food and living expense help to more than 4,000 clients has for years been the beneficiary of the Chamber of Commerce's Bridge City Christmas Parade, which donates new toys. The Ministerial Alliance then passes on to help its clients give their kids a Merry Christmas.

"The parade has definitely been a huge blessing for our children," said Melissa Isaacs, director of the Ministerial Alliance, an organization that is supported by 20 churches in the Bridge City/Orangefield area.

"I'd say it brings in half of our donations for the children. Last year, we filled up the back of two pickup trucks with toys just from the parade."

This year, board member Scot Shaffer and the Chamber of Commerce are stepping up to fill the vacuum, by rounding up toys for the youngsters.

"The Chamber works together with the Ministerial Alliance each year," Shaffer said, "and instead of the parade this year, we're going to replace it with a "Season of Giving."

Normally, participants in the annual Bridge City parade are required to bring new toys in exchange for entry of the floats and vehicles they will ride for the trip down West Roundbunch Road.

The toys are then donated to the Ministerial Alliance for Christmas presents for children whose parents are facing tough economic times, such as those who have lost jobs because of the pandemic and the economic shutdown it brought.

The Season of Giving runs through Dec. 5, Shaffer said.

"We're going to have different locations, where the businesses ask their customers to bring new toys. For instance, we've got most of the insurance agencies in town to help us, Bill Nickum State Farm, the All-State agency, aNe Insurance and mine (Farmers Insurance. We're trying to add doctors' offices, too," Shaffer said.

Shaffer is hopeful the "Season of Giving" can conclude with an appearance by Santa Claus, a normal finale of the annual parade. Shaffer's shooting for hosting Santa at the Bridge City Community Center on Dec. 5, the normal date for the Christmas parade.

He says details are being worked out to keep it all COVID-19 safe.

"Instead of the kids coming and asking Santa for toys, we're going to ask them to bring a gift to Santa for other kids," Shaffer said.

That would wrap up a huge year for the Bridge City/Orangefield Alliance, which is getting a very significant makeover on its building next door to the First Baptist Church of Bridge City.

"About four and a half years ago we were outgrowing the little white house," Isaacs said, "and I told the pastors, 'I'm starting to pray for a new building. I don't know how, but if He wants us to have one, He will provide one.'

"The people in the community, the church community ... donations just started coming in, a huge donation. This community is so helping for people in need. This is a huge gift, to be able to help others."

Sidewalks were recently poured and all that remains is finishing out the interior of a 3,500 square-foot building that will replace the 1,000 square-foot house First Baptist donated to get the ministry started in the 1990s. 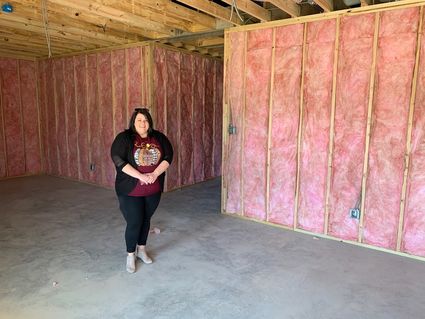 Melissa Isaacs, executive director of the Bridge City/Orangefield Ministerial Alliance, shows off what will be the front lobby of a new home for the ministry with more than three times more space than what it is replacing.

Isaacs said her organization provides food and various financial assistance with utility and rent payments to about 4,000 clients this year. Gifts are being sought for about 450 children.

Since the reno at 200 W. Roundbunch Road began in February, the Ministerial Alliance has been run out of the Fellowship Baptist Church on Farm to Market Road 408 with many of its four dozen volunteers filling food boxes to be issued Monday and Wednesday mornings (9 a.m. to noon).

Isaacs and her financial secretary oversee client intake and management of the ministry.

"The Alliance would not survive without volunteers," Isaacs said.