Local duck hunters from both Texas and Louisiana have enjoyed solid starts to their seasons. 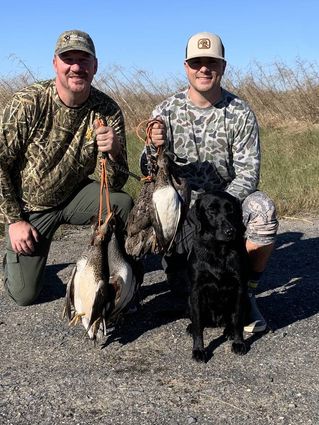 The glow from L.E.D. lights lit up all the local boat ramps as trucks and mud boats got cranked up for an early morning run to the marsh. Local hunters who cross the Sabine River to hunt in Louisiana finally got to begin their season a week later after Texas kicked theirs off last weekend. As expected it was a very hit and miss proposition to say the least. The current state of the marsh is very different than in normal years due to the increased levels of freshwater that seemed like it would never drain.  Wet conditions have kept freshwater dependent vegetation growing wild and that has definitely altered the plans of many hunters. Ponds and flats that have historically been magnets for ducks have seen very few birds come into the area and stay as the ultra abundant food sources have ducks spread out all over creation.

Now if you are fortunate enough to have available food sources like some local hunters then it's just a matter of time before you have birds. The reports from the Louisiana opener proved that theory out in a big way. Hunters that were much deeper in the marsh and affected less by the saltwater and freshwater ratios had great numbers of

birds and outstanding hunts. The hunters closer to the rivers and bayous struggled somewhat but did manage to take a few birds. Teal and Gadwall made up the majority of the ducks taken for most hunters while a few were fortunate enough to take pintail, widgeon, and even a few mallards. The big surge of hunting pressure certainly changed the way the birds worked but look for that to settle down as the season continues and the number of hunters gets back to a normal level.

Texas waterfowl hunters jumped out to a fast start and continue to do well. Typically early season results hinge on agriculture like rice and as the season gets underway those birds tend to end up in the coastal marshes. This year its been about even so far as both the rice field hunters and the those in the marsh have been enjoying great success. The local refuges have had great reports as well so that's a big plus for those folks who hunt public lands. Louisiana took a big hit with hurricanes and actually closed several of their popular refuges due to navigation hazards so many hunters have been left to either find alternate places to hunt or just take advantage of some of the fall fishing that has also been very good.

For now the long range forecast looks very good for local waterfowl hunters as cooler temps have provided a welcome change. The strong north winds associated with each front will move a few birds out of the areas but look for those numbers to build back up soon. New birds just now entering our area plus those returning once the big north winds die down and slowly swing south and east will bolster the population. Water levels in the tidal marshes will be a concern for a few days as the tides are extremely low right now courtesy of the north winds associated with this each passing front. Many areas that are prime habitat become expansive mud flats at this time of the year and are only accessible with a surface drive motor or long tail. When the water levels return the ducks won't be far behind. If the first few days are any indication of how the season is going to turn out then it may be time to stock up on shells because this has all the potential to be one to remember.