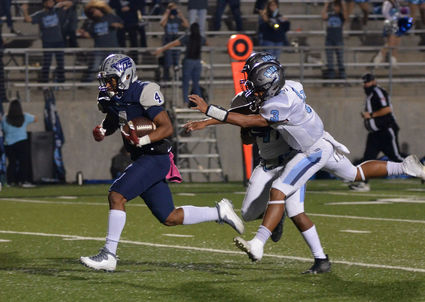 Mustang Elijah Gales galloped through the Bulldog defense 30 yards after Artavious Samuel's interception to put the first six points on the board for the Mustangs. The 'Stangs led 38-8 at the half.

It's down to one. The West Orange-Stark Mustangs stand alone as the Orange County representative in the 2020 high school football playoff race after dominating Sweeny this past Friday night.

The Orangefield Bobcats finished their season with a loss to Sealy.

The West Orange-Stark Mustangs started their Class 4A, Region III bidistrict bid with a punt on their first offensive possession against Sweeny this past Friday night.

After that early lull, the Mustangs scored on every other offensive pos-session of the game as they rolled to a 59-8 win at Randall Reed Stadium in New Caney.

After taking a 38-8 lead after the first half, coaches agreed to play with a running clock through the final two quarters of play. With the Mustangs running just two offensive plays in the second half, they scored on a punt return, interception return and fumble return as the defense took a key role.

West Orange-Stark, now undefeated at 8-0, takes on China Spring in the area round this Friday. China Spring beat Jasper in bidistrict play 45-19.

WO-S opened the scoring when Elijah Gales sprinted 30 yards for the score on the first play from scrimmage on their second drive. Angel Ibarra booted the extra point for the 7-0 lead.

Jarren Terrell and Jalen Thompson connected on an aerial touchdown later in the first quarter, capping a three-play 37-yard drive for a 14-0 advantage.

That connection worked again on the next Mustangs' drive as Terrell hit Thompson on a 53-yarder in another 1-play drive that upped the WO-S lead to 21-0.

Sweeny accounted for its only score of the game with a three-play, 56-yard drive capped by an 18-yard run by Trace Holmes. The two-point conversion was good for the 21-8 difference.

That would be all the Mustangs' defense would allow as Ibarra hit a 36-yard field goal to give WO-S the 24-8 lead in the second quarter. Gales scored again on a 21-yarder and Jayson Zeigler Jr. added a 21-yard touchdown for the Mustangs' 38-8 halftime lead.

Thompson opened up the third quarter with an interception that went 25 yards for the touchdown and then Gales added a punt return TD for a 51-8 WO-S advantage.

Tyrone Brown found a loose ball to account for the Mustangs' final TD as he rumbled 65 yards for the score and the 59-8 decision.

The Mustangs finished with 297 yards of total offense while Sweeny managed 135 yards. Leading the WO-S offensive parade was Terrell at quarter-back, hitting 7 of 11 attempts for 134 yards and two touchdowns. Gales had four rushes for 58 yards while Jamaal Shawk added 34 yards on four totes.

Sweeny's Xavier Woods carried the ball 12 times for 47 yards while Holmes had 29 yards on 20 carries with a TD.

The Sealy offense was too much to handle as the Orangefield Bobcats fell 41-0 in the first round of the Class 4A, Region III playoffs this past Friday night in Huffman. 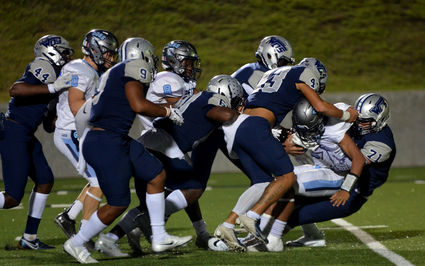 The Mustang defense led by Casen Barnes sacks the Bulldog quarterback Trace Holmes. Sweeny finished the game with only 135 yards, despite having the ball for over 35 minutes of the game.

The Tigers nearly tripled the Orange- field offensive output, putting together 349 yards of total offense to the Bobcats' 128 yards.

The Tigers, who improved to 8-2 with the win, scored their first TD on a half-back pass that went for 51 yards and a 7-0 lead. Another long pass resulted in a 14-0 lead with four minutes left in the first quarter. That lead extended to 28-0 in the second quarter as the Tigers showed they could score on the ground as well.

While the Bobcats struggled to get hold of the Tigers in the first two quarters, they managed to limit Sealy to just one TD in the second half. It was another long pass that would give Sealy its final points, this one a 62-yarder in the third quarter.