Davis jumped from Triangle to the stars 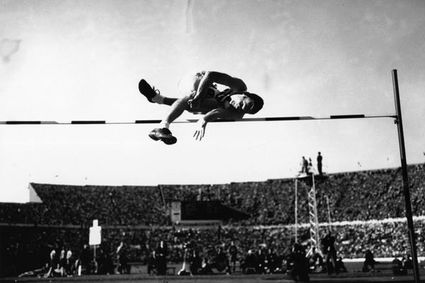 Walter "Buddy" Davis, a Nederland native and Texas A&M grad, won the 1952 Olympic high jump gold medal in Helskinki, Finland, setting an Olympic record of 6-8. Davis was a track and basketball All-American at A&M and played seven seasons in the NBA, helping his teams to two championships. He is the only athlete ever to win both an NBA title and a track and field gold medal. Davis became a banker after ending his sports career and his first job was at Vidor State Bank.

Entertainer Tex Ritter got a park in downtown Nederland. Football coach Bum Phillips got a statue.

And Nederland native Walter "Buddy Davis" probably had the best record of them all.

"I think he deserves a statue in downtown Nederland, but Bum Phillips took that spot," Shaun Davis said of his dad, who died at 89 years of age on Nov. 17.

"But my dad was not the kind that he'd worry about something like that."

He is the only athlete in the history of sports to have an NBA championship ring and an Olympic track and field gold medal.

He grew to stand 6 foot, 9 inches tall and a natural athlete who could play any sport.

But that was only after he spent three years, from age 8 to 11, with polio. With both legs paralyzed, he was unable to walk on his own.

"My dad's primary recovery tool was a bike that was mounted in place [like today's exercise bikes]," Shaun Davis said. "He really started being able to run and play when he was 12 and 13, and he took on extraordinary dimensions, physically."

Buddy Davis was a three-sport star at Nederland: a three-time all-district pick in basketball, a district champ in baseball and a state meet qualifier in the high jump.

"Buddy was the type when there was a sport coming up, if he wasn't doing it, the coach would ask, 'Would you do this this weekend?'" said Shaun Davis.

The younger Davis worked as an executive for Temple-Inland and lived in Orange County a while back. His wife, Tammy, worked for The Record Newspapers; two children graduated from Little Cypress-Mauriceville High.

director of state and local affairs

Buddy was a three-time All-American at Texas A&M, twice in track and field and once in basketball. He won the NCAA high jump in 1952 and that summer went to Helsinki, Finland, to win his gold medal with an Olympic record jump of 6-8.

This was when high jumpers used a form called "the Western roll" where they jumped head first over the bar and landed in a pit of sawdust.

Davis cleared 6-11-3/4 at the 1953 AAU Championships and is credited with being the first to "unofficially" clear 7 feet in an exhibition meet. 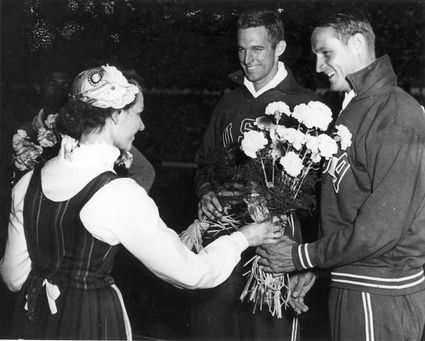 "He didn't talk about the NBA or Olympics stuff until later in his life. It was just rare that he talked about his incredible accomplishments," Shaun said.

He did tell his son his first basketball contract was for $5,800 and he received a $1,500 bonus for winning an NBA championship.

Davis worked as a deputy sheriff for Jefferson County during basketball off-seasons and, after adding a banking certificate from SMU to his A&M degree, he became a banker. His first job was at Vidor State Bank.

After retiring as a banker, Buddy and his wife worked as civilians for the Coast Guard in Puerto Rico, running a supermarket and restaurant on base.

After that, Buddy Davis worked another decade as a part-time disaster specialist for FEMA.

"He really did have an incredible life," his son said.