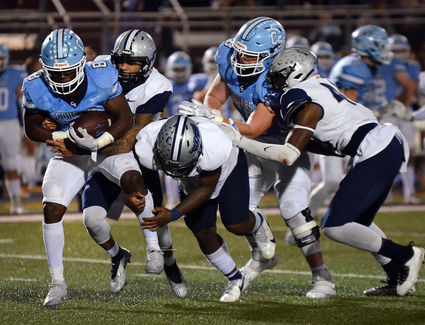 The defense came alive in the second half and was able to thwart China Springs and hold them to no points but the Mustang offense couldn't get enough on the board to win.

And then there were none.

After a dominating march through the 2020 high school football regular season, the West Orange-Stark Mustangs were poised to roll through the playoffs.

China Spring had a different idea in mind altogether.

The Mustangs fell 35-22 in the Class 4A, Region III Area round this past Friday night, ending the 2020 prep football season for Orange County as its last lone representative on the gridiron.

The loss left WO-S with a final 8-1 won-loss record but the District 11-4A, Division II championship in hand.

The Mustangs and Cougars traded possessions to start the game this past Friday night in Magnolia, both ending in punts. The next WO-S possession ended with the same result but with a different twist. The punt attempt by Angel Ibarra was blocked by China Spring's Dawson Exline who then picked up the loose ball and ran 10 yards for the score. The extra-point kick was good for a 7-0 Cougars lead with 4:24 left in the first quarter. The Cougars would up that lead to 14-0 with 24 seconds left in the first quarter when the Mustangs fumbled a punt return, giving China Spring the ball at the WO-S 8-yard line.

Three plays later, the Coogs' Major Bowden pushed across the goal line from the 5 for the two-touchdown lead.

Before the half was over, China Spring would increase its advantage to 21-0 when its offense marched 79 yards in 14 plays to score on a 4-yard run from Emmanuel Abdallah with 5:06 left in the half.

The Mustangs finally found the end zone when quarterback Jerren Terrell hit receiver Jerrold Brown Jr. on a 68-yard pass-and-catch with 4:50 left in the first half. Ibarra booted the extra point for the 21-7 difference. That wouldn't last long, though, as the Cougars answered with a 71-yard TD run by Abdallah just 48 seconds later for a 28-7 China Spring lead with 4:02 left in the second quarter.

Colton Locking was on the receiving end of quarterback Bowden's pass last in the first half for 52 yards and the Cougars' final touchdown of the night. With 2:48 left in the second quarter, the Mustangs trailed 35-7.

West Orange-Stark, certainly unaccustomed to losing, mounted a comeback that would reach into the third quarter. The Mustangs cut the Cougars' lead to 35-4 after ending an eight-play, 65-yard drive with a 4-yard TD run by Jayson Zeigler Jr. 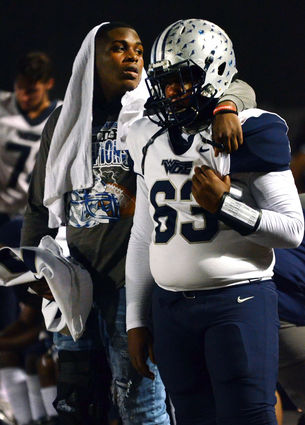 Mustang senior Courtney Davis comforts younger brother Andrew Wilson at the end of the loss to China Springs. Davis was injured early in the season and Wilson stepped in at center to fill his shoes.

Midway through the third quarter, the Mustangs pulled to within two scores when Terrell hit Brown Jr. for a 15-yard touchdown pass. The two-point conversion run by Terrell was good for a 35-22 difference in the game.

While the Mustangs' defense shut down China Spring's offense through the entire second half, the Cougars got too far out ahead to be caught as both teams went scoreless through the final quarter-and-a-half.

Terrell finished the night with 137 yards, hitting 8 of 23 passing attempts with two touchdowns while also leading the Mustang rushing attack with 63 yards on eight carries. Brown Jr. was Terrell's top receiver with 83 yards and two TDs on two catches with Zeigler grabbing three catches for 29 yards.

Bowden completed 6 of 8 passes for 86 yards and added 72 yards on the ground. It was Abdall who did the damage, though, as he had 185 yards and two touchdowns on 31 carries.