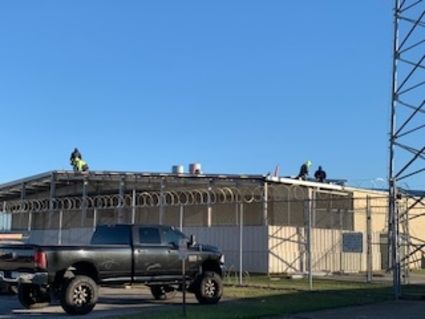 Workers Monday afternoon repair some of the more than $340,000 in damage to the roof of the Orange County Jail caused by Hurricane Laura on Aug. 27, 2020.

While all four branches of government – Congress, the Supreme Court and both incoming and outgoing Presidencies – should have plenty to do at year-end in Washington, Orange County, Texas waits for somebody along the Potomac River to OK federal assistance after Hurricane Laura.

While D.C. dithers, the clock keeps ticking on what figures to be more than a $1.5 million total cost to the county to fix a leaky jail roof.

The "dry side" of Hurricane Laura swirled winds as high as 100 miles per hour from north to south across downtown Orange and the Orange County courthouse complex on Aug. 27.

While the worst of the winds and rains fell on the Louisiana side of the state line, rainwater got into the jail through the holes and caused mold.

More than three months later, nearly a hundred inmates from Orange County are housed in the Henderson County Jail in Athens, Texas, more than a four-hour drive away.

The goal is to have them home around New Year's.

"Our goal was sometime in January at first," John Gothia, Orange County Judge, said Monday. "We've been pushing and we hope to have the jail back by Christmas.

The good news is that the county, eventually, should get most of its money back.

Insurance has already paid $500,000 up front for jail repairs.

Kurt Guidry, the county's maintenance director, says the pricetag for the new jail roof is $342,025.50.

That does not include all the work Guidry's men have done restoring the inside of the jail.

"We've brought some people [inmates] back after we moved some people [from the Orange jail] to the state jail. But felonies keep happening. People keep getting arrested. So we've had to take some people back to Henderson, because we have a limited capacity."

The Orange County Jail was built, originally, in the 1970s, Guidry said, but it has been added on to in both the 80s and 90s, the latest additions being jail dormitories, a new jail kitchen and administrative offices built in 1995.

According to testimony at Commissioners Court in recent years, the Orange County Jail has a capacity of about 300 inmates, but has been operating with a daily headcount of about 200 in recent years.

Along the Gulf Coast, it is routine procedures for jails to do their best to empty out their jail cells when a hurricane is expected.

Those behind bars for misdemeanors, for instance, may be released to handle their own evacuations. Those who have been sentenced to prison are transported ASAP to state custody and as many as possible of the remainder are evacuated to a lockup on higher ground.

"We're trying to get them all back as soon as we can."

The cost to Orange County for Henderson County to house inmates, according to Gothia's $8,000 per day figure, is about $250,000 per month. If that is accurate, the county will be looking at about $1 million.

"We have an insurance program for that," Gothia said.

"The insurance is paying for displacement [of inmates]," Guidry said, "but not necessarily the cost for food."

Eiselstein said his deputies typically transport about "four or five" inmates to or from Athens every week.

The jail captain said they initially evacuated as many inmates as Henderson could take and that left 100 sheltering in the jail. Those who stayed behind were those who had court dates coming up soon. But the delay in getting all inmates back has juggled that timetable.

"They have to be here [in Orange] to do the Zoom hearings, so we have to go get them," Eiselstein said. "Some get released on parole, and we have to go pick them up and bring them back.

"We're not keeping anybody longer than we have to."

Eiselstein's jail staff stays busy with the 100 or so inmates still in the Orange County jail. Guidry says that's about all they can hold until the repairs are done.

The holdup now is the mold, mainly getting an inspector in to OK its remediation so the roof can be replaced.

"We patched and covered the holes before Hurricane Delta [in October] and no more water penetrated," Guidry said. "But mold was found in the dorms during the dryout and that created a bigger problem as far as ripping out the Sheetrock. That really slowed the process down."

Joel Ardoin, emergency management coordinator for the county, reported recently that the state had certified more than three times the financial damage from Hurricane Laura than the federal government had set as Texas' threshold to receive storm reimbursements from FEMA.

But the Feds are dragging their heels on approving the state certification.

With property insurance paying for jail repairs and a separate policy defraying the expenses of housing inmates elsewhere, the county could maybe get by without FEMA money for the jail.

But it's counting on Washington declaring Laura a national disaster in Texas to get help paying about $12 million for debris.

Meanwhile, jail inmates from Orange are 200 miles from home.

But inmates all over the state haven't been allowed to see their families since April because of COVID-19.