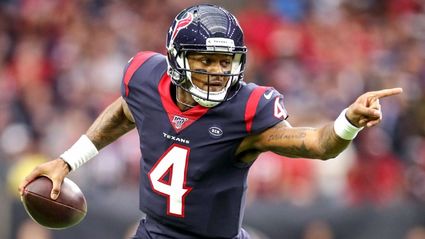 National Football League fans from the Lone Star State really got short-changed by both the Houston Texans and the Dallas Cowboys who suffered different maladies which resulted in similar outcomes-a team that was clouded from the post-season playoff picture before the season was even half over.

The Cowboys had a new head coach (Mike McCarthy) with plenty of head coaching experience while the Texans had a leader (Bill O'Brien) who supposedly learned from the best (Bill Belichick) but still was in his first head coaching job. After demanding to hold the duo role of head coach/general manager, his wheeling/dealing got him fired after four games-all losses.

Although McCarthy made a few changes in the offense and defense, what hurt him most was when his star quarterback Dak Prescott went down with a compound fracture of his right ankle early in the season which ended his 2020 season and turned the quarterbacking chores over to veteran Andy Dalton, who was let go by the Bengals when they drafted Joe Burrow.

The Cowboys found out really quick that Dalton was no Dak Prescott or anything close to him. The losses started coming in streaks and the Cowboys knew their season was in trouble.

However, because of the three other weaklings in the NFC East Division, the Cowboys were only one-half game out of first place-until they got waxed by the Washington Redskins on Thanksgiving Day. They still are mathematically alive and a couple of December wins would put them right back in the hunt.

Houston is a different story-with seven losses they are almost mathematically eliminated. But they have a great quarterback (Deshaun Watson) and a 73-year-old interim head coach (Romeo Crennel) who knows the Texan players, the offense and especially the defense-what he's been coaching in the NFL for more than 40 years.

Going into last weekend, the AFC South was dominated by the Indianapolis Colts and the Tennessee Titans, who met Sunday afternoon at Indianapolis to snap the first-place tie.

Going into that match-up, the Colts defense was second best in the NFL while the Titans were among the top rushing teams in the league. Indianapolis was favored by three points.

Usually the defense has the upper hand against a good offensive team, but that wasn't the case Sunday.

The onslaught continued after the intermission and the Colts scored a couple more touchdowns-probably against the Tennessee reserves-but the final score favored the visiting Titans, 45-26.

Henry finished the game with 178 yards on 27 carries and scored three touchdowns. The Colts No. 2 defense was like No. 2, allowing 449 total yards.

It also was Henry's third consecutive 100-yard game, his seventh this season and his eighth straight on the road, tying former Titans running back Chris Johnson for the second-longest streak since the 1970 merger. Only Hall of Famer Barry Sanders (10) in 1996-97 had a longer streak.

Houston plays Indianapolis twice (Sunday and Dec. 20) and Tennessee once (Jan. 3) in their remaining five games.

Watson's offense should challenge the Colts defense while Houston took the Titans to overtime at Tennessee in October before losing 42-36 and could have a say in who the AFC South champion will be.

But the Texas’s will have to do it without their two fastest players, wide receiver Will Fuller and corner back Bradley Roby, who were both suspended for the rest of the season for violating the NFL’s performance-enhancing drug policy.

KWICKIES...Pittsburgh Steelers' wide receiver Chase Claypool is the first player to score 10 touchdowns in the first 10 games of his NFL career. He surpassed former Steelers Franco Harris and Louis Lipps by one.

And this is for Orange's Kenny Ruane, who is a Cleveland native-Sunday's 27-25 win over Jacksonville gave the Browns an 8-3 record and ends a streak of 12 losing seasons.

The Detroit Lions fired head coach Matt Patricia and general manager Bob Quinn after getting walloped 41-25 by the Houston Texans Thanksgiving Day. Since Detroit won the 1957 NFL title, it has won only one playoff game-on Jan. 5, 1992. Darrell Bevell, who has 14 seasons of experience as an offensive coordinator, will be the team's interim coach for the final five games.

The Buffalo Bills, who beat the Los Angeles Chargers 27-17 Sunday, is 8-3 to start a season for the second year in a row. Last year the Bills faltered somewhat at the end of the season.

JUST BETWEEN US...The Denver Broncos got themselves in quite a jam last weekend by not adhering to the NFL's coronavirus protocol. Third-string quarterback Jeff Driskel tested positive for COVID-19 while starter Drew Lock, Brett Rypien and Blake Bortles were added to the COVID list as high-risk contacts with an infected teammate. All four were seen on film attending a meeting without masks and were evasive during the contact-tracing process. The Broncos unsuccessfully attempted to get Sunday's game postponed a day or two. But the NFL is unreceptive to such requests when rules violations have occurred. So, Denver played its home game against the New Orleans Saints using a practice-squad wide receiver taking the snaps. It was a disaster as Kendall Hinton, who played some quarterback at Wake Forest before switching to receiver, completed one pass and had two intercepted. The Saints waltzed away with a 31-3 victory. Denver is the first team since 1988 with more interception than completions.