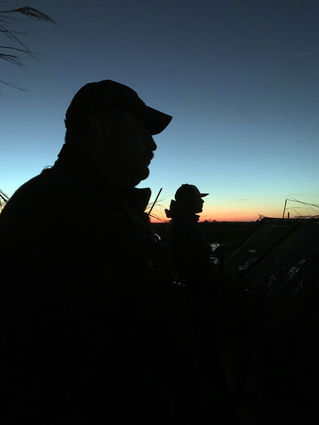 The sun sets on the first split for local duck hunters.

With the Texas duck season closed for the split season the only game in town is for folks chasing ducks is hunting in Louisiana. This weekend will be the final weekend of the first half of Louisiana's duck season. The second half will re-open on December the 19th one week after Texas re-opens their duck season once again on December 12th. So far the overall report has been very good from both sides of the Sabine River as local hunters have cashed in on a solid population of waterfowl in the area. All of the pre season water issues in the marshes apparently was a false alarm as it hasn't hurt the hunting in most areas.

The weather for the first half has been a little warmer than most folks would like but it's been far from bad. The mild temperatures and just right mix of cold fronts has made the first half of the season almost enjoyable. The cooler and windier conditions have also helped curb the numbers of mosquitoes waterfowl hunters must deal with and that in itself has been a huge bonus. Unlike the coming months when the weather will certainly get tougher the cold fronts of the first split didn't dry up the marshes with ultra low tides. For the most part there has been plenty of water and that makes accessing your favorite pond a much more enjoyable task. The folks who hunt the Sabine Refuge missed out on the first split due to a closure thanks to the hurricane debris. Besides the refuge closure all in all the conditions and numbers of ducks for both the Texas and Louisiana first half of the season have been really good.

Now if you are not hunting Louisiana and are waiting for Texas to re-open now is the time to take of any maintenance you have been putting off. First thing that comes to mind is re-brushing and repairing blinds. A new coat of brush on an existing blind will help with concealment and also give you an opportunity to scout while you are in the area. Do your best to break up any outlines and look as natural as possible. Keeping your blind from looking like a taco stand in the middle of a pond will increase your success tenfold. The hunters who take the time to really blend their blinds into the natural surroundings are usually the ones with the heaviest straps of ducks when they reach the cleaning table.

Another item that may require some maintenance is your decoys. Take a few minutes to wash them up really well and inspect the cords and weights. Most hunters have gone to Texas Rigging their decoys for the convenience but some still put theirs in bags. Decoys are a big investment for waterfowl hunters and they need to be properly cared for when hunting and when they are being stored. Always remember that when you buy decoys you get what you pay for, so shop accordingly.

During the last week or so there has been a great focus on small business and using them during the holiday season and beyond. I want to personally thank and also recommend one of our local small businesses and that's Craig's Gun Shop on highway 62. These guys always take great care of their customers and do exceptional work in a timely fashion. I have been using them for a while now and I can't say enough good things about them. If you have any firearm that needs attention I would urge you to give them a look, you will not be disappointed.

We are getting ready for the home stretch of duck season so be sure to have all your gear in order because it will be here and happening before you know it.