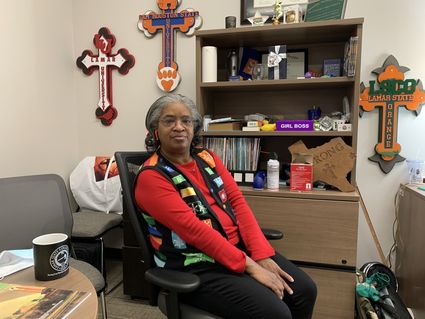 The new Dean of Academic Studies at Lamar State College Orange said there was never a doubt in her mind she would be a teacher someday.

"I knew in the third grade I wanted to be a teacher," Dr. Suzonne Crockett said Tuesday morning. "I love teaching, and I miss teaching. But now I'm able to teach the teachers.

"And I keep my hand in. I usually teach a math or education course almost every semester."

Waiting until age 30 to begin her own college education was never a negative in her mind.

"My parents' plan for me was college," said the native of the Pecan Acres subdivision in Pineville, Louisiana. "College was never not an option.

"What happened was I met my husband and we married the year I graduated from high school. I was taught when you love someone, you get married. I chose to get married and I chose to go to work. I actually eloped."

Crockett worked for the Women, Infants and Children program in Louisiana. She transferred to the Sulphur office and commuted to that job from Orange for a while after she and her husband, Rev. Ronnie Crockett, moved here.

The couple has four children and 12 grandchildren.

Suzonne Lynette Holmes Crockett is the daughter of another Baptist pastor, Rev. Leroy Holmes, and Susie Lee Holmes, "such an awesome baker" that "she won various awards on her biscuits."

Crockett's dad, who pastored two churches while working at the Huey P. Long Charity Hospital in Pineville and serving as an auxiliary policeman, attended Louisiana College in Pineville. Her mom graduated from Grambling State. Two aunts were school teachers. College graduates looked down from the family tree.

"I was definitely not a first gen [first-generation student]. And I wasn't even the first doctor in my family," the LSCO veteran said.

"College was the expectation in my home."

She began her post-high school studies at Lamar-Orange in 1992, to honor her dad who had passed away a few months earlier.

Crockett earned an associate degree at what is now LSCO, then attended Lamar University where she earned both a bachelor's and master's degree.

She began her career as a math teacher at Port Arthur's Thomas Jefferson High School, in 1998.

In 2004, she returned to LSCO as a math teacher. She has served as Division Director of Education, Leisure Learning and Mathematics; and was later named Associate Dean, then Interim Dean of Academic Studies. Along the way, she earned a Doctorate degree from Sam Houston State University.

As Dean of Academic Studies, Dr. Crockett is responsible for the academic programs on campus, including policies and development as well as overseeing and supporting the faculty and staff.

"Math is a subject a lot of students struggle with and I understand their struggle," Crockett said Tuesday, taking education back to what she sees as its basics.

"And I'm always willing to meet the students at the point of their needs."

The Dr. Seuss book "Green Eggs and Ham" came off the bookshelf to explain her secret to success.

"'Green Eggs and Ham' is how a lot of students feel about mathematics," she said. "They don't like math.

"People do not like mathematics because they have not tried it. When we expose students to a concept, we have to make sure they are ready for those concepts. The students have to see the relevance of it. 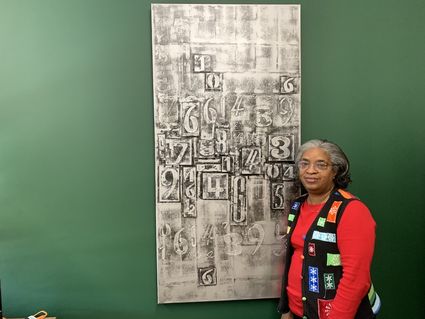 "It's like a formula: you don't care about the length times the width equaling the area until you have to lay down some carpet. And then you care.

"Perhaps you need to talk about momma and daddy having to replace the carpet. All the students in Southeast Texas know what a hurricane is."

Crockett says she took her children on a vacation trip to St. Louis to let them see the Gateway Arch. That, she said, was to help them better understand parabolas in their upcoming algebra class.

"My classroom is my home, and now as dean of academic studies I employ those same strategies for the department," she said. "When we are introducing new ideas, new legislation, new testing platforms ... well, when we bring the relevance to the team, then the project becomes real.

"I really want people to wake up and say, 'I can't wait to get to work with Crockett. You never know what we're going to do today.'"