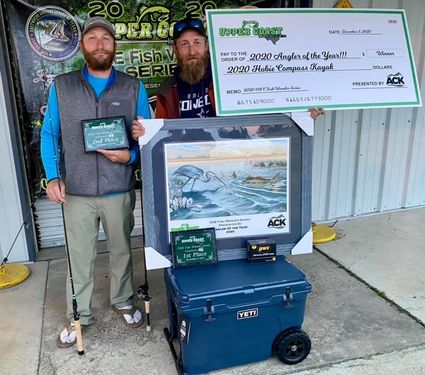 Blake Roberts and his brother Dave are seen with their winnings during the Upper Coast Kayak Association final event of their One Fish Wonder Series.

The Upper Coast Kayak Association hosted the final event of their One Fish Wonder Series out of The Salt Club on Pleasure Island and the winner came as no surprise to the rest of the field. Each competitor is allowed to weigh in only one redfish and once again, Blaze Roberts made his way to the scales with that coveted fish!

A single redfish can actually win one of seven different prizes at each event, but the largest red eventually earns the biggest payday. An angler earns the Angler of the Year title with the heaviest total weight of his best three tournaments.

Roberts' winning 9.62-pound fish enabled him to not only win the AOY award, but also win $3000 worth of prizes that included a new Hobie Compass Kayak, a 45 qt. Yeti on wheels, an H&H rod and Lews reel combo and custom marine art by Florida artist Anastasia Musick.

Finishing less than a half pound off the pace was Blaze's brother, Dave. Dave is best known in this area and across the Texas Gulf Coast for his monthly Kayak Chronicles column in the popular Texas Saltwater Fishing Magazine. He obviously fishes as well as he writes!

The tournament field continued to grow this year in spite of the Pandemic and monthly hurricanes. The group averaged 34 fishermen per event. Tournament directors, Brent Louviere and Nathan Mcintosh presented the Salt Club a check for $1575 in support of the Club's help throughout

the year. They especially thanked Max Smith and Steve Smith for their help at every tournament.

Kayaking is a unique way to fish skinny water while accessing areas not available to larger boats. The benefits are numerous when exploring smaller bodies of water, but I can attest to the fact that it is much more enjoyable if both shoulders are in working order!

My only experience in fishing from a kayak was enjoyable only while fishing in one direction.Many years ago, several college team mates were using kayaks to access their duck blinds when the season closed and invited me to bass fish while they picked up decoys, etc.

It was a small bass virtually every cast as I slowly drifted with a light wind which minimized any problems associated with only one functional shoulder. By the time I reached the opposite end of the massive marsh, however, the north wind was howling and paddling against it was no longer a viable option.

For the next three hours I pulled the small kayak across flooded grass and knee-deep mud. When I finally got back to the camp my buddies were sitting around the fire eating teal gumbo and potato salad. Ever since, I have not fished out of another kayak, kept a closer eye on the weather and chosen my friends more carefully!

The recent dab of cooler water has apparently improved the deep-water spoon bite on Toledo Bend. Actually every pattern has improved when the wind allows, but spooning has been very consistent at depths of 25 to 32 feet.

Jay Avarez and Guy Tomlinson caught yellow bass, white bass, largemouths up to three pounds, catfish and a few nice white perch jigging hammered nickel spoons in the Indian Creek area three days in a row. "I like a chrome wobble spoon, but it can't hang with the thinner spoon right

"I hate cleaning them," added Tomlinson, "but my family just loves to eat those yellow bass.A small pile of those filets guarantee my next trip!" 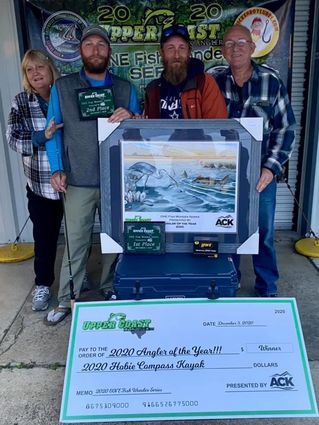 It is certainly not for everyone, but wading the shallows on the north and east side of Sabine Lake continues to improve. We have caught most of our trout on a Softdine XL and a Skitterwalk, but I talked with three different anglers last week that are finally catching both trout and reds on pink and day glow Corkies.

A big trout is still in the three to five pound range, but I will fish for those kind of trout all day. That is a tremendous upgrade over what we have seen for the past two years.

When the conditions are right and it has been perfect all week, boaters are taking advantage of gulls and terns ratting out both trout and reds in the mid-lake area. Four inch plastics fished under a cork have been a really good choice. Chicken on a chain and candy corn have been two of the hotter colors!