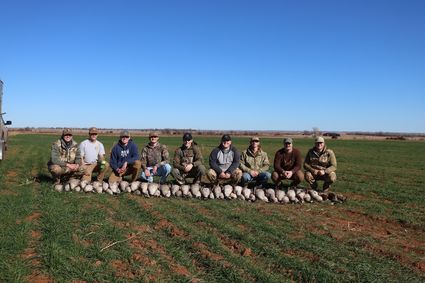 Shooting geese on winter wheat in the panhandle is a popular choice for hunters in late season.

For months the faithful waited in anticipation for opening day and in what seems to be the blink of an eye the 2020-21 duck season is just about gone. With a few weeks to go before the end many water fowl hunters have resorted to road trips to get that last little fix in before the party ends. For many hunters the coast has been the destination, especially the Rockport and Port O' Conner areas since

they have been covered up with ducks for most of the season. The stories about rafts of redheads that black the sky are more than most hunters can stand, especially hunters who have had slow years. Don't discount the reports because they are true, the ducks along the coast are thick and are absolutely amazing to watch. The opportunity to hunt ducks in a different type environment is always a welcome change of pace and sheer numbers of birds down there right now is worth the trip. Perhaps the biggest draw is the fact you can hunt so much public water and have success doing it. With a little bit of effort a resourceful hunter can make a great trip down there and not break the budget. It's far more acceptable down along the coast to hunt ducks in the open water along the bays than it is anywhere else so just about any hunter who can put together a blind can set up on some prime real estate. Plenty of ducks and places to hunt equal a good time for any water fowl hunter.

Another popular venue for the water fowl hunter is the Katy prairie and Eagle Lake areas as well as the surrounding El Campo and Garwood. These towns are smack in the middle of some prime agriculture and are just absolute magnets for ducks and geese. Rice is the key to this part of the world and when you have food and water the ducks and geese won't be far behind. This season has been strange for many hunters in that area due to the fact the snow geese have acted funny all season, typical patterns have gone out the window and made it tough to get consistent results. The one thing that ha remained the same is that if you get weather like fog or good low clouds and a stiff south wind you can really work the birds over. Duck hunters on the other hand have had great success as it seemed like the green winged teal just won't leave and the pintails are plentiful. Many hunters are reporting limits of ducks along with a handful geese being the norm.

Last but certainly not least on the water fowl hunters road trip list is the panhandle, places like Amarillo, Dumas, and Knox City are all hot spots that you may or may not know about. Easily the biggest draw for hunters to this area is the opportunity to shoot Canada geese. The panhandle area of Texas affords hunters the best shot at taking these beautiful birds in big numbers. With miles

and miles of open agricultural country to choose from the geese in that areahave a steady diet and little hunting pressure which translates into some great shooting opportunities for anyone who makes the trip. Also what many folks don't know or maybe don't hear about is the fact that the snow geese up there receive even less hunting pressure than the Canada geese do. Once the snows reach the panhandle they get a chance to rest because very few if anyone hunts them until the special conservation starts at the end of regular duck season. The panhandle is probably one of the best places you can go during the special season simply because the snow geese have not been hunted and are much easier to decoy. If you are considering a late season hunt I would certainly think about this area and put it near the top of any wish list.