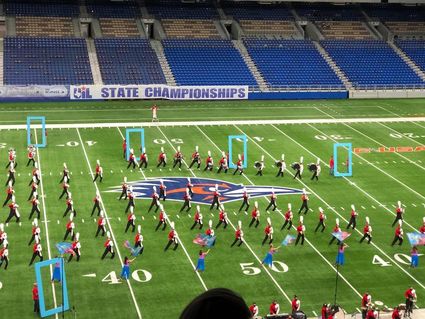 “Over the moon,” was the way Bridge City’s high school band director described the mood on the bus ride home from San Antonio Tuesday morning.

“It was a great time. A little bit of stress wrapped up with excitement,” Tami Goss said after the band finished seventh out of 20 teams at the University Interscholastic League’s Class 4A Marching Band State Championships.

The competition was held in the Alamodome in San Antonio.

It was the first time Bridge City had qualified for the state championships since 1985.

Performers numbered 137 musicians from grades 9 through 12. Their 6-minute performance was titled “Memento.”

Goss is in her fifth year as Bridge City’s head band director, after six years as an assistant director.

“The four of us [band directors] are fortunate, that we teach on all levels, from sixth grade on up,” Goss said. “We get them when they’re young and try to hang on to them as long as we can.”

Typically, the band’s largest class is freshmen. This year’s band has 55 freshmen compared to 25 seniors.

“Of course, we want them to have a great performance the day of our competitions. We want everything to go right,” she said.

“But if we can get them to practice on a high level, then they go into their performance prepared, not doing anything different. They’re doing what they’ve been prepared to do.”

Area bands wishing to compete in UIL marching band contests build their performances in practice and test them out at football halftime shows.

Then it’s time for the regional meet, with those band earning “first division” honors qualifying for the area meet. The top four from five area meets advanced to state this year.

“It’s hard to know how you stack up until you get to area,” Goss said. “We have an area that’s really competitive.

“The feeling is that if you get to state, you’ll be competitive.”

Besides their trip to state, a couple more things about the 2020 season will stick out.

Both are related to the once-in-a-lifetime – one hopes – COVID-19 pandemic.

“I’ve been teaching 18 years and I’d say this has been the hardest year, not knowing what kids we’ll have from day to day,” Goss said.

“We use all the kids we have. I tell them they’re all the quarterbacks of this team.” 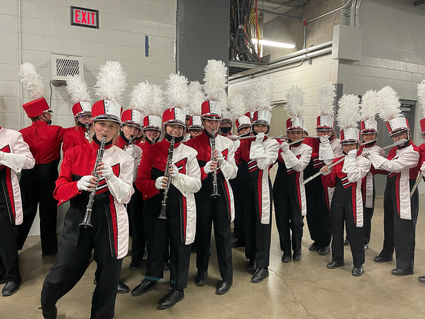 The second change is the result of a schedule tailored to prepare for COVID-19 demands.

The school district began classes earlier than normal in August and made its days slightly longer in case the pandemic forced the complete shutdown of education.

Just in case, it built in optional makeup days after Thanksgiving. Not needing to use them, students finished their fall classes before Thanksgiving.

“They’ve been out of school for weeks,” Goss said, “but they’ve given up their vacation time to come and practice.

“Normally, our season is over at the end of October or early November. Band members have worked hard since July and this was a great way to wrap up the season.”