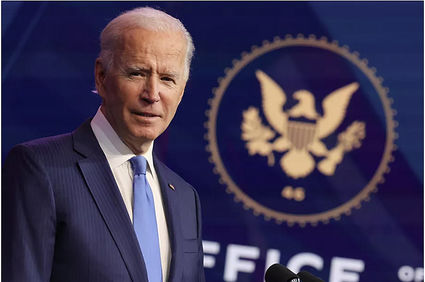 And so does the Orange County Republican Party chairman.

David Covey joined McConnell and Putin on Tuesday in recognizing Democratic Sen. Joe Biden as the president-elect, one day after the Electoral College certified Biden's 306-232 win over Donald Trump in November's election.

It was the exact vote count Trump bragged was a landslide when he won office four years ago.

"He is the certified winner now," Covey said of Biden. "It looks like he had the electoral votes."

Tuesday's certification by delegates in all 50 states added up just the way mainstream media outlets had it on Nov. 7, when they called the election for Biden.

"This cycle showed us there are some things we have to work on to make sure we continue to have a fair election system," Covey said.

"But at this point, the results pretty clearly show Biden is elected. Once they [Electoral College] meet, that's pretty much the final call."

Trump's claims of a rigged election and his lawyers' filing of more than 50 lawsuits alleging widespread fraud were roundly rejected, judge after judge ruling they provided no substantial evidence to back up the claims of malfeasance.

According to official counts – and recounts -- Biden won a record 81.3 million votes nationwide and both his and Trump's total of 74.2 million votes, were the highest totals ever cast for a candidate in a Presidential election.

While President Trump has referred to Biden as President-elect in recent Tweets as of midday Tuesday he still maintained the election was stolen from him.

"What I've never seen in my long life is the futile effort to set aside an election that was already won, and fairly won, by such a large margin," Smith said.

"I don't know what his hypnotism is that so many people will ignore such obvious facts and believe this absolute pile of non-truths."

Texans voted for Trump by a 52.0% to 46.5% margin, with the Republican president getting 5.9 million votes.

In Orange County, Trump won 81.2% of the record 36,000 votes as local Republican office holders each won with 100% of the votes cast, having run unopposed.

"I don't know what to think about it," he said. "There are things that don't make much sense to me. And I think that's about all I should say about that."

Then he said some more.

"If any of these [voter fraud] things they say, if there's no merit to them, let's move forward. I've got a county to run and that's my main focus," Gothia said.

McConnell, Kentucky's seven-term senator, had been silent on Trump's claims of a rigged election.

"I want to congratulate President-elect Joe Biden," he said in a floor speech Tuesday.

"Many of us had hoped the presidential election would yield a different result. But our system of government has processes to determine who will be sworn in on Jan. 20.

"The Electoral College has spoken."

Putin, a longtime Trump acquaintance whose government was charged by the U.S. Justice Department with meddling in the 2016 election, had not joined the dozens of international leaders who had acknowledged Biden's win in the six weeks since Election Day.

"Russian-American cooperation based on the principles of equality and mutual respect would meet the interests of people in both countries as well as the entire international community," Putin said.

"For my part, I am ready for cooperation and contacts with you."

Heightened security was in place in some states as electors met to cast paper ballots. The results will be sent to Washington and tallied in a Jan. 6 joint session over which Vice President Mike Pence will preside.

Several House Republicans, led by Rep. Mo Brooks (R-Ala.) are planning to challenge the election results on Jan. 6. If a Republican senator joins this long-shot effort, it will force both chambers to take a vote on the election.

McConnell warned Republican senators in a private caucus call Tuesday not to object to the election results because Republicans would need to vote it down and appear President Donald Trump.

After weeks of Republican legal challenges that were easily dismissed by judges, Trump ally Ken Paxton, the Texas Attorney General, tried to persuade the Supreme Court to set aside 62 electoral votes for Biden in four states.

That might have thrown the election's outcome into doubt.

But the justices rejected the effort Friday on a 7-2 vote.