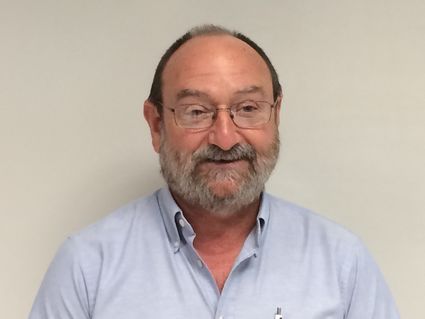 Nothing makes an Orange County Commissioner's day like a call from a constituent complaining about potholes.

Clark Slacum wants to help – and says he can, thanks to FEMA.

The Federal Emergency Management Agency announced last week that federal assistance will be made available for those affected by Hurricane Laura, which raked this area with winds as high as 100 mph on Aug. 27.

President Trump signed the authorization needed last week so a five-county area including Jefferson, Galveston, Jasper and Newton counties could be reimbursed. He traveled to Orange Aug. 29 to see the damage first-hand.

That assurance will allow the county enough cash flow to purchase a new $400,000 BOMAG "recycler" for the Roads and Bridge Department, which Slacum, the County Engineer, heads up.

"It's like a garden tiller," Slacum explained, "but it tills up the road. It pulverizes the existing asphalt and mixes in new material and allows you to pour a new road topping.

"We do have an existing recycler, but it's old, and it breaks down. This new one will be primary, and the old one a backup. But we'll probably run both at the same time, which will be a substantial benefit."

Slacum pitched the new machinery before a budgeting workshop last summer as a three-year lease-to-own purchase, spreading the cost out.

When the budget was approved in September, Gothia explained that several of the most expensive items on the county's wish list would only be purchased if FEMA agreed to reimburse about $14 million in expenses due to the storm.

Most of that $14 million was for debris cleanup. Gothia has said that's about $12.5 million the county has spent from its reserves. The remainder was mainly for disaster overtime pay already agreed upon by the feds.

"When they initially approved the budget back in September, [commissioners] said, 'We're approving it, but you've got to come back in a few months, after we've gotten some money in,'" Slacum said.

"My source for the recycler said they needed 60-90 days to deliver it once we ordered, but frequently it takes longer than their estimate. We want to make sure we have it by March so we can start using it."

Gothia said he expected the recycler and another one or two large capital items up for approval on next week's Commissioners Court agenda.

"You pay on delivery for big items like that," the judge said. "It'll take some of that stuff six months to be delivered, so we want to go ahead and get it ordered."

The county has gained plenty of experience dealing with FEMA about disasters, though the paperwork and documentation rules regularly change. Gothia thinks they've got a jump, thanks to internal record-keeping.

"We're waiting on a call any day to set up an initial meeting where we can give them a set of invoices. In the past, we've done that and they've given us up-front money pretty quick," Gothia said.

"But you never know for sure."