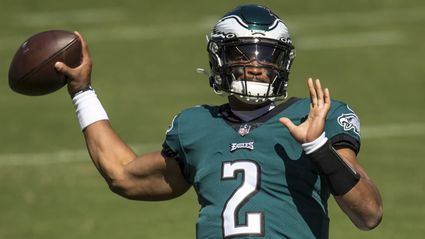 A few years ago, I was playing in a bridge tournament and during one of the breaks I got to talking with a gentleman from the Houston area about high school football.

"So, you're from Orange," the man said after reading it on my name tag. "You must be proud of the team from West Orange-Stark that has won all those state championships," he asked already knowing the logical answer.

I told him that I had the opportunity to watch several young men play well enough to go on to the next level and even a couple (Kevin Smith and Earl Thomas) who made a name for themselves in the National Football League.

"I watched my nephew play against a team from Channelview which had a kid playing quarterback who was the son of the head coach and he was phenomenal," he stated. "I believe his name was Hurts-yeah, that's it, Jalen Hurts. I understand there were coaches from LSU, Texas, Texas A&M and Alabama just to name a few who wanted to recruit him."

Hurts signed with Alabama and rode the bench most of his freshman year until he got his chance. And when he did get to start for the Crimson Tide, he was outstanding because if a receiver was covered, he would flash his 4.4 speed and make positive yardage.

His one problem was that he was sporadic with his passing game, but 'Bama continued to win during the regular seasons.

But Hurts was really off during the 2017 national championship game and was replaced by freshman Tua Tagavailova, who was the top quarterback recruit in the nation.

This eventually led to Hurts transferring to Oklahoma where he started and was the runner-up for the Heisman Trophy in 2019.

To everyone's surprise, Hurts was drafted by the Philadelphia Eagles even though their starting quarterback Carson Wentz just received a four-year contract extension worth more than $125 million in 2019 after leading the Eagles to the NFL playoffs three straight years.

But Wentz seemed to lose confidence in his ability last season and the boo-birds were out in force wanting to see what the rookie (Hurts) could do with the team. But Head Coach Doug Pederson opted to stick with his starter.

Wentz was even worse this season, being the NFL's 32nd-rated starting quarterback (last) and sports writers in the Philadelphia area were begging for a quarterback change.

But Pederson claimed that if he changed quarterbacks, it would signal to the players that the team has given up on the 2020 season and they still were favored to win the NFC East Division title.

Finally, after much more criticism, Pederson relented and put Hurts in the game to quarterback his team in the third quarter of Week 13's 30-16 loss to Green Bay. The young Texan hooked up with former University of Houston quarterback-turned-receiver Greg Ward for a 32-yard touchdown pass.

And then, last Tuesday, Pederson announced that Hurts would start Sunday's home game against the 10-2 New Orleans Saints to see if he could stop their four-game losing streak. This was the Eagles' 21st quarterback change in the last 25 years.

Again, when Hurts couldn't find and open receiver, he would pull the ball down and run for positive yardage, providing a spark with his legs that Eagles' fans never saw from Wentz.

Hurts led his team to a 24-21 upset over the Saints-the first ever in nine games in the absence of starter Drew Brees in the last two seasons-- knocking them out of the No. 1 seed.

He ran for 106 yards, threw for 167 yards and a touchdown, connecting on 17 of 30 passes in his first career NFL start with no interceptions but he did fumble late in the fourth period.

"I thought overall there were good things," Pederson told the Associated Press after the game. "This wasn't about one guy. It was about how resilient this team is. He was part of the win. There were a lot of good performances."

But Pederson hemmed and hawed when pressed by the media about which of his two quarterbacks will start Sunday at Arizona against the 7-6 Cardinals.

Perhaps Pederson is reluctant to have a $34 million-a-year quarterback (Wentz) sitting on the bench while a raw rookie (Hurts) starts only his second game.

Cleveland plans on dropping their nickname Indians-which they've sported for 106 years-sometimes this week. What a shame.

A couple of weeks ago during Tampa Bay's bye week, quarterback Tom Brady and head coach Bruce Ariens planned to play a round of golf. But the NFL stepped in an said they couldn't play together, for whatever reason.

A couple of college head football coaches were relieved of their duties last weekend even before their regular season has ended. Former Chicago Bears head coach Lovie Smith was given his walking papers by the University of Illinois while Auburn fired Gus Malzahn after losing to lowly South Carolina Saturday. Malzahn who led the Tigers to the national championship game in his first season, got a $21.7 million buyout of his contract.

Green Bay Packers quarterback Aaron Rodgers is the fastest in NFL history to reach 400 touchdowns. He also has 73 games in which he passed for three or more touchdowns, which is the fourth most ever.

JUST BETWEEN US...NCAA President Mark Emmert told the Associated Press last week that he "hopes lessons learned through navigating the pandemic will lead college sports leaders to prioritize opportunities for athletes when it comes time to cut costs." Emmert said the NCAA and its members schools have shown an uncommon ability to be nimble and responsive in addressing issues of eligibility, scheduling, recruiting, transfers and championship events. Ohio State, for example, has made plans to lose more than $100 million, cutting wages and jobs but not teams. Stanford plans to drop 11 sports programs from one of the largest athletic programs in the country. At lower levels Furman discontinued baseball and Akron got rid of cross-country.