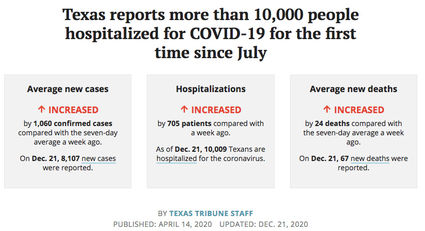 The County Judge is asking for a way out, but said Tuesday afternoon that he has passed along the state’s order rolling back relaxed Covid-19 restrictions:

Until further notice, Orange County bars without food service must shut down and restaurants and businesses can operate with only 50% capacity. Elective surgeries must be postponed.

Orange County is part of a nine-county Trauma Service Area that stretches from Newton County to Galveston County but does not include Houston and Harris County.

Because that TSA R has had seven consecutive days in which the number of Covid-19 hospitalized patients as a percentage of total hospital capacity exceeds 15%, it has been deemed an “area with high hospitalizations.”

That designation kicks in the rollbacks of businesses and restaurants from 75% capacity to 50%.

“We’re asking them to give us a waiver on that,” John Gothia, County Judge, said. “We don’t know if we’ll get it, but we’re going to at least ask. Hopefully, in seven days when we look at that number again, we’ll be able to come back out of that.”

Joel Ardoin, county emergency management coordinator, reported at Tuesday’s meeting of Commissioners Court that only 26 people from Orange County were hospitalized, according to statistics put together by local health authorities. Of those, seven were on ventilators.

Of course, Orange County doesn’t currently have a hospital, the closest being in Beaumont, Port Arthur or Louisiana.

Jefferson County, home to Beaumont, has had more deaths caused by Covid-19 in December – 45 as of Monday, the Beaumont Enterprise reported – than any other month since the first case was reported in our area in February.

The Covid-19 death total in Orange County stands at 46 for the entire year, according to Ardoin.

The Texas Department of State Health Services dashboard shows 66 Orange County deaths, a huge discrepancy created by different reporting rules that have yet to be reconciled.

In order for a TSA to reopen businesses to previous capacities, the area must go seven consecutive days with a hospitalization rate below 15%.

TSA R, which includes Orange, Hardin, Jasper, Newton, Jefferson, Chambers, Liberty, Brazoria and Galveston Counties, had a record high of 39% last Thursday and was at 23% Tuesday, according to DSHS.

According to state stats, TSA R has a total population of 1.3 million and 1,336 hospital beds, 315 of which were occupied Tuesday by patients who had tested positive for COVID-19.

“The good news is the vaccine is rolling out steadily every day,” Gothia said. “Let’s don’t let our guard down.”

Ardoin said the first 200 doses of the Pfizer coronavirus vaccine were distributed in Orange County last week to health professionals at doctors’ offices that are the first line of defense.

“The next group will get the Moderna vaccine,” Ardoin said, referring to the second vaccine approved for use by the FDA. It does not require sub-zero refrigeration.

“It may get here as early as next week for nursing homes,” Ardoin said.

Gothia said high-risk individuals and first responders would be next in line for vaccinations, a group that also includes teachers and educational staff.

Plans are to serve the second group out of two county facilities.

“We’re going to depend heavily on retail pharmacies – CVS, Walgreens and Walmart – for the general public,” Gothia said.

According to the Texas Alcoholic Beverage Commission, Orange County has only 29 licensed bars – establishments that make 51% or more of their income from liquor sales – compared to 315 TABC-licensed restaurants that serve liquor but make 51% or more from food sales.

The county extended its Covid-19 disaster declaration, as well as its Hurricane Laura disaster declaration for three months each, through March 23, 2021, to maintain eligibility for federal and state reimbursement payments on expenses generated by those events.

Commissioners also voted unanimously to offer a six-year abatement agreement with Optimus Steel to expand its plant in western Orange County, next to the Neches River.

Carl LeBlanc, a candidate in last year’s Republican primary for the Precinct 3 Commissioner, opposed approval of the deal, saying “You’re giving money away.”

Commissioners okayed the expenditure of about $360,000 on equipment for the Road and Bridge Department, purchases made contingent upon the approval of about $10 million in Hurricane Laura reimbursements by FEMA, which the county received two weeks ago.

They also signed off on allowing the Sheriff’s Office to spend more than $230,000 from its Treasury Forfeiture Budget to purchase new drone software, a weapons and explosives vault and a new armored SWAT vehicle.