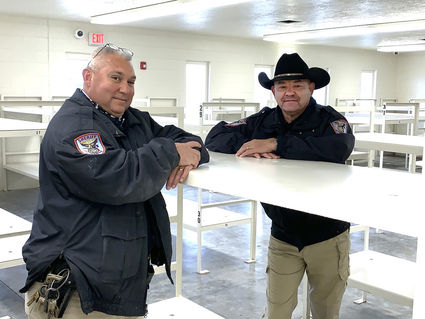 To say Sheriff Lane Mooney's first six months on the job have been full of surprises might be putting it mildly.

-- a train derailment and chemical spill that forced evacuation of a neighborhood of 600 people;

-- a hurricane that destroyed the jail roof and forced the movement of 100 prisoners nearly 200 miles.

And all this came during the worst health disaster in U.S. history, the ongoing coronavirus pandemic.

"We've been really busy, and we've been able to do a lot of things I wanted to do," Mooney said. "And four days into my term, I got the Covid."

Asked about his biggest challenge, Mooney said it's been the jail. More than 100 inmates were evacuated ahead of Hurricane Laura making landfall Aug. 27, to Henderson County Jail in Athens, Texas, in northeast Texas.

Debris blown by the 100 mph winds packed by the storm pockmarked the roof over the jail's four dormitories, located next to the Sheriff's Office.

Roof work continues, and in the meantime the county maintenance department has made many repairs to the interior. And about 80 inmates are still in Athens, waiting for the roof to be finished in the next few weeks.

"We completely redid all of the dorms, and it cost us $1.2 million in total," Mooney said. "It has been a slow process but it's starting to ramp up."

Insurance will pay for the roof repairs and for the $4,000 to $8,000 per day housing charge from Henderson County, Orange County officials have said.

Hurricane Laura arrived less than a week after Mooney's department was called on to assist with an incident in the Gist community, which straddles the Jasper and Newton County lines, just north of Orange County.

Newton County deputies responding to a disturbance call were fired upon.

The location was the scene of three previous situations with shout fired involving the same two people, but none so violent.

This incident ended up with one man in jail, the other hospitalized with a bullet wound.

"When another department calls us for mutual aid, we're going to be there for them," Mooney said.

Newton County Sheriff Billy Rowles told a Jasper reporter that deputies from Jasper and Orange Counties were called to assist, along with state troopers and game wardens.

The men, armed with a shotgun and a rifle, barricaded themselves inside a metal cargo container during the standoff, popping through an opening to fire rounds at officers, Rowles said.

The Newton sheriff told the reporter a day after that one bullet came through the window of the armored vehicle he was in and missed his head by a foot. He said Newton's armored vehicle had 25 to 30 bullet holes in it,

Without the armored vehicles, "I'd have been killed," Mooney said. "And Sheriff Rowles. He took a gunshot right to his face had he not had the armor between them.

"I had about 12 shots right into my window. Chief Hanauer [Pinehurst Police Chief Fred Hanauer], he would have been killed."

Mooney wouldn't provide many details about the incident, noting that his records of the incident had been sent to the Texas Rangers, who are investigating.

But Tuesday, the Sheriff's Office told Commissioner's Court it was investing $225,000 of its restricted Treasury Forfeiture Funds to buy a replacement armored vehicle.

Deputy Chief Keith Reneau said the original was totaled in the shootout in Gist.

The department had already ordered a replacement for a drone that was shot down during the ordeal.

"We were probably on scene 12 or 13 hours, and we were engaged in a running gun battle for a couple of hours," Mooney said.

"We were worn out when the DPS SWAT team got there to relieve us. I have been involved in some serious incidents, but this rates up there."

Reneau, Mooney's right-hand man, says the department has used asset forfeiture funds to purchase about $1 million of new vehicles, replacing 21 that were worn out or involved in wrecks or done in by floods.

More of the funds have been spent on equipment, such as drone technology, radars, camera systems, night vision. The use of the forfeiture funds saves taxpayer money.

"For the first time in six or seven years, we've got radars in the vehicles," Mooney said. "I know a lot of people have been concerned about traffic safety.

"Every car now has a gun rack in it, so guns won't be laying in cars like they have been in the past. Each shift now has night vision gear, all at no cost to the taxpayer."

Mooney says he has fully staffed the department for the first time since at least 2015, when he was a deputy there.

"We filled those jobs in the first three days," the sheriff said. "We had 13 or 14 spots empty; it was a massive undertaking. But I had people lined up."

The new sheriff said he has reopened the Vidor and Mauriceville substations, which had been closed since Hurricane Harvey in 2017 and which were just repaired. The SWAT team and Narcotics Unit has been reorganized. He has hired female and minority deputies for patrol.

"Being on this side of things has been very educational," Mooney, a former deputy and Precinct 4 constable, said. "I think I have surrounded myself with some of the best people in law enforcement."