Sixty-six Years of "Hanging on to Each Other" 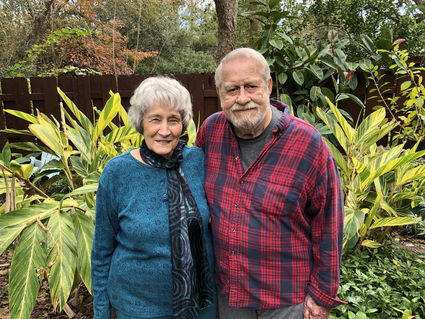 There was no way of knowing our late years would get down to isolation because of a life threatening pandemic. It's certainly not the way we wanted to spend our final years. However, after being in lock down for the past few months, after 66 years of marriage, Phyl and I have found a silver lining.

It all started when Phyl started writing down the names of everyone we could remember who we had crossed paths with or were dear friends. Most who were our ages, 84 and 86, had left us way too young. Phyl was making a list of the ordinary people who had impacted our lives.

In my life I had been fortunate to be at just the right place to meet and get to know many celebrities, going back to Audie Murphy, V.P. Johnson, Jack Ruby, Elvis, Bum Phillips to Bob Hope and others in between. Lately, thanks to good weather, we have been spending time in our court yard, visiting about the road we had traveled, about raising children, three our own, pioneering a dozen different ventures. We just hadn't taken time to realize the years were slipping away. Neither one ever gave any thought to age.

Different stages, like reaching 40 years old, etc., which seemed to bother some people, never bothered us. We just now really came to the realization that we are in the fourth quarter, late in the last quarter for me. In our garden visits we discovered that there were so many things that we had never spoken of or had forgotten. We have spoken more about my early childhood and other things than we had through all the years. Phyl learned for the first time that I had attended Allen Military Academy in Bryan. I told her about the first time I met my father Clay and other heart breaking events that followed me throughout my childhood. Hearing this for the first time prompted her to say, "I didn't realize you had such a bad childhood. I'm proud of how you overcame it."

Like I said before, we have operated different businesses, like the Crawfish Bucket in Nederland, each a story of its own. We are mostly known for the newspaper business, but there is so much more. I'm the public face of our newspaper but Phyl has been the one who helped me pioneer the first one, The Opportunity Valley News, that took three years to make a nickel. We than went to Port Arthur and Mid-County with the Community Post. The Post's slogan was, "You can lean on us." The paper became an overnight success. We ran both papers at the same time with the help of our son Mark and daughter Karen and lots of friends who came in to help.

Nine months after starting the Post, Cox Enterprise, owners of the Port Arthur News, made us an offer we couldn't refuse. We sold the O.V.N. and Triangle Press printing plant, along with The Post. I was paid a considerable sum to be a consultant for five years. They didn't listen to much of my advice. They bought the Orange Leader and changed the leadership. John Dubose became General Manager. The Opportunity Valley News fell by the wayside.

We went back into the newspaper business with four other men, who one by one dropped out, leaving Phyl and I with the Penny Record and we expanded to the County Record. Through all those years Phyl has been the bookkeeper, bill payer and taken care of billing. A lot of work. Besides those chores she also types every word I write, which I do by hand, words no one else can read. I've written a million words and she has typed them all. So if you have been reading stuff for 50 years, the words came through her.

We have had some great years.

We stayed busy but always made time for our children. At one time we were operating three liquor stores, Warehouse, in Orange, Suds, in Little Cypress and Midway, in Bridge City, while putting out the Orange and Port Arthur papers. The kids got off the bus, Phyl fixed them a snack at the store, I would close while she went and prepared dinner, saw to homework, etc. I was very active with the boys in Little League sports which I coached. I most enjoyed helping to raise four of our five grandchildren. I spent many days with Karen's three boys, taking them to practice and lessons. We never had a downtime. Phyl says, "Never bored."

That's just a small example of why we are enjoying a bad virus we didn't ask for; it's giving us a chance to reminisce about the long road we have traveled. Any success I had I couldn't have done it without her and every day I tell her I love and appreciate her. In better days before the virus, when I went off before she woke, I wrote her a note and a poem which she dated and kept.

I've always played my cards close to the vest and Phyl is a very private person who doesn't believe in airing our private linen. She never gossips on the phone or plays on Facebook. She's careful not to speak badly about anyone. I've never known anyone who knew her that had a reason not to like her. We are opposites who have made a lifetime partnership excel.

Our wedding day, Dec. 31, 1954, was a nice morning and we had agreed to meet down the street from Phyl's house at a certain time. We picked up a friend, Margaret Hunt,  who had agreed to be a witness or bridesmaid. She would accompany us to Kountze where a lady J.P. would marry us. Clarence McNelly, the clerk, would issue the license. We needed a blood test to get a license so several days before, not knowing where to go, I pulled into Hamilton's Clinic, in Beaumont. The doctor and employees were surprised at our request. No one getting married had ever chosen their place for a blood test because it was a hemorrhoid clinic. How in the world could this marriage ever fail with this great start at the hemorrhoid clinic.

We married and returned to Port Arthur. Phyl attended Bishop Byrne Catholic School and had it been discovered that she was married, she wouldn't have been able to graduate in May. The next few months we lived apart with only Margaret knowing about the marriage. Phyl finished school and 10 months to the day, on Oct. 31, our first child Mark was born. Two others followed, Allen two years after Mark and finally four years later, Karen, the girl Phyl was waiting for. Five grandchildren and nine great-grand kids have followed.

The most surprising is how quickly those 66 years have traveled. The odds for any couple making so many years are not very good, not only because of divorce but also sickness and death figures in. If it ends tomorrow, it's been a great ride.

Over the years we have lost to death hundreds of friends, each very special When we married, all those years ago, we both had plenty of relatives, today they are nearly all gone.

As hard as it is to believe, it's been 66 years. It's also as unbelievable that we squeezed so much into one lifetime. That crazy start had all the elements for failure. It was really beating the odds.

These times will pass. I have feared getting the virus which would be hard odds to beat. I think of the horrors some families go through with a spouse dying alone in an ICU unit. I pray Phyl and I can dodge it until we can get a vaccine. We're fortunate to have good friends and a great family around us. Phyl and I will enjoy the time we have left and all of us will just "hang on to one another."