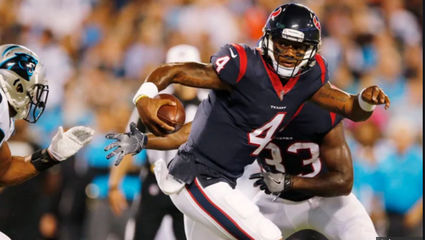 Here we are, two days before the beginning of a new year and four days before knowing which National Football League teams will be vying for the coveted Lombardi Trophy which goes to the winner of the Super Bowl.

As sorry as our two NFL franchises have played during this weird pandemic-influenced season, both the Houston Texans (4-11) and the Dallas Cowboys (6-9) should be determining factors in which teams win the AFC South and NFC East divisions.

That's because the Texans are hosting the Tennessee Titans, who are tied with Indianapolis for first place in the AFC South, and the Dallas Cowboys, who have an outside shot at the NFC East Division championship with a Washington loss and a Dallas road win over the New York Giants on Sunday.

Regardless of who wins the NFC East championship, the division champion will enter the playoffs with a dismal won-loss record below .500.

The Texans' front office is wanting Head Coach Romeo Crennel to bench quarterback Deshaun Watson for this final game--which is meaningless for--because he hurt his elbow late in Sunday's 37-31 loss to Cincinnati when Watson's throwing hand got caught in the facemask of Bengals' defensive end Sam Hubbard and he landed awkwardly on his right elbow.

The front office doesn't want to risk Watson suffering a serious injury that could turn away some good prospects for the general manager and head coaching positions that need to be filled in January.

But I don't think the NFL will allow a team to bench its starting quarterback in a game where the division championship is on the line.

Both the Colts and Titans have identical 11-4 records going into the final regular-season game. However, Indianapolis has a 4-2 record within the division while Tennessee is 4-1 and is expected to easily defeat Houston Sunday despite getting blown out at Green Bay Sunday 40-14.

The rest of the conference is set with Kansas City (14-1) wrapping up the West Division and also the home-field advantage and Buffalo winning its first division championship in 25 years.

The Pittsburgh Steelers, after starting the season 11-0 and then losing three in a row, rebounded from a 24-7 deficit late in the third quarter to edge past the Indianapolis Colts 28-24 and secure the AFC North title.

The upstart Cleveland Browns reverted to their ways of years -gone-by as the lowly New York Jets won their second game of the season with a 23-16 upset victory. It was the worst game of quarterback Baker Mayfield's young career as he didn't throw a touchdown pass but had two turnovers and failed his team at crunch time but should land a wild card spot Sunday.

The Seattle Seahawks locked up the NFC West championship Sunday by nipping the gritty Los Angeles Rams 20-9. It was the fifth division championships in 11 seasons under Head Coach Pete Carroll but their first since 2016. The Seahawks' defense had one of its best outings of the season, frustrating Rams quarterback Jared Goff and shutting down their running game.

Green Bay came one step closer to locking up the home field advantage (which is worth at least a touchdown playing in that Arctic weather) by trouncing the Tennessee Titans 40-16 on a snowy field Sunday night before a national audience.

The New Orleans Saints wrapped up the NFC South title and still has an outside shot at the home field with their 8-2 record inside the division if the Packers falter Sunday at Chicago. Second place Tampa Bay is the only non-division winning team that has clinched a playoff spot. I guess all that money they gave to sign Tom Brady and Rob Gronkowski paid off.

KWICKIES...Coastal Carolina, the undefeated team that I followed all season, had a field goal blocked in overtime of the Cure Bowl Saturday night and the Chanticleers were upset 37-34 by Liberty, which also only has one loss.

If you want to see the most boring offense in college football, watch the Liberty Bowl tomorrow on ESPN at 3 p.m. when Army (9-2) meets West Virginia (5-4). The West Pointers run 95 per cent dive plays and may pass twice in a game if the Black Knights run into a third-and-long situation. They are a 7½ -point underdog.

Baltimore Ravens Lamar Jackson is the first quarterback in NFL history with back-to-back seasons of 800-plus rushing yards. Going into Sunday's final game, the former Louisville star has rushed for 908 yards.

I was saddened to read that my favorite Polish major league pitcher Phil Niekro died at age 81. The knuckle-ball artist pitched 5,404 innings in the majors until the age of 48, won 318 games and was a 20-game winner four times.

New Orleans running back Alvin Kamara tied an NFL record with six touchdowns in the Saints 52-33 victory over the Minnesota Vikings. Kamara had a career-high 155 yards rushing.

JUST BETWEEN US...After the Houston Texans lost their fourth straight game-three with late game fumbles-defensive star J.J. Watt delivered a blunt rant admonishing his teammates for their lack of effort in the 37-31 loss to the lowly Cincinnati Bengals Sunday. "Red-faced and filled with emotion, primarily deep feeling of anger, frustration and disgust, defensive end J.J. Watt delivered an epic, expletive-laced rant after Sunday's 37-31 loss to the Bengals at NRG Stadium," Monday's edition of the Houston Chronicle stated. "The sources of the three-time NFL Defensive Player of the Year's ire during a season gone awry: a 4-11 record, a fourth consecutive loss and teammates who evidently don't share his work ethic and professionalism. Watt didn't call out any teammates specifically," the article continued. I guess that's the main reason he wants out of the organization. He wants a Super Bowl ring and knows with the team's rebuilding plans it won't happen in Houston. It would be neat if he signed with the Pittsburgh Steelers and joined his two brothers.