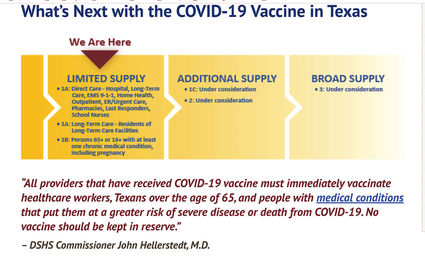 The state announced Monday that it would be getting another 325,000 doses of Covid-19 vaccine, saying it already had received more than 793,000 doses.

Orange County had received just 200 doses as of Tuesday morning.

Those were shipped to one location, the Brookshire Brothers Pharmacy in Vidor, which is giving a maximum of 20 vaccinations per day to predetermined sections of the public.

The vaccinations are not yet available to the general public.

County Judge John Gothia said the county had been allocated 100 additional doses, requested more, and that request was granted.

But he didn't know any details of when and how many would be coming at Tuesday morning's meeting of Orange County Commissioners Court.

"The 200 that we had is pretty much gone," he said. "Either they've been given out or they've been accounted for with appointments already made, to first responders, medical and nursing homes.

At that rate, 100 new doses would be a five-day allotment.

And by first responders, Gothia admitted he was talking about doctors, medical staff, EMTs, correctional medical staff and school nurses.

Policemen, firemen and Sheriff's Office deputies are not among the Phase 1A or 1B populations to be vaccinated but people 65 and over are.

Gothia said county police, fire and sheriff departments were pre-booking their vaccination appointments but did not mention if seniors would be vaccinated ahead of those government employees. 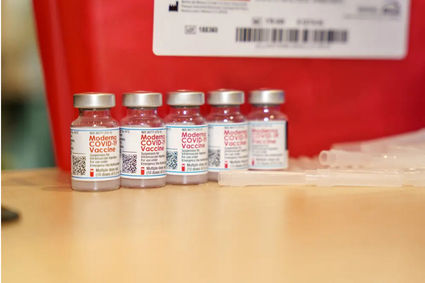 Of course, when it comes to allocations, Orange County's is lower than other Southeast Texas counties, because it doesn't have a hospital.

In Winnie, Riceland Medical Center got 500 of its county's supply and vaccinated Jefferson County Sheriff Zena Stephens and her deputies on New Year's Eve, according to a story aired by KFDM-TV.

Gothia said Orange County citizens have been getting vaccinated for four weeks.

"The shots are taking place since the shots have been available," he said. "It's just that the general public is wanting it today.

"I'm wanting it today. But that's not the schedule they have."