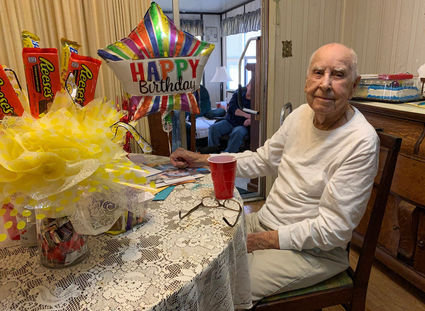 "Every president from Roosevelt to Biden," he said Tuesday as the dishes were cleared from his 100th birthday party, a small family affair.

"I voted for [Franklin] Roosevelt twice."

Born on Jan. 5, 1921 and raised in Grand Prairie, Louisiana, near Opelousas, the World War II vet and DuPont retiree was actually alive during the final days of the Woodrow Wilson administration, just after the ends of World War I (1918) and the Spanish Flu pandemic (1920).

Today, the newly minted centenarian looks like he could still crawl into position as a belly gunner in a B-24 bomber and keep a keen eye out for enemy fighters.

There's a sparkle in his eyes.

Did you know that in 1999, at age 98, he became the oldest Texan to have a heart valve replacement?

He only needed a one-night stay in the hospital then. Same with his recent surgery to remove a salivary gland tumor.

But his hearing's not good and, with coronavirus protocol requiring plenty of distance between he and the masked interviewer, Cormier sat in the middle of the two and relayed questions and answers Tuesday.

She says only Covid-19 safety measures have slowed her dad down.

"He still has his driver's license and he likes to drive through Whataburger and Dairy Queen, but misses sit-down visits with friends and from St. Mary's Catholic Church and the Knights of Columbus.

"For a year now, that's come to a stop, because of the virus," Cormier said. "He's not as active as he used to be."

Fontenot, who tends a garden and a tiny Chihuahua named Nikki, is a longtime fan of the Houston Astros baseball team.

Growing up on a farm in Louisiana meant Fontenot wasn't immediately aware of the Great Depression.

"Of course, he didn't know what was going on in the big world. He had plenty of food, and he had a roof over his head," Cormier said.

He was part of a graduating class of seven at Grand Prairie's school and spent two-plus years in the Civilian Conservation Corps before marrying Virgie, his wife of 70 years until she passed away in 2011.

He enlisted in the Army Air Corps in 1942 and was discharged in 1946. He trained as part of a bomber crew but the war ended before he saw combat.

After the war and before DuPont, Ray joined his dad in Orange, working in the Consolidated Steel shipyard.

Ray and Virgie built their first house in Groves, then moved to Orange in 1960. The couple had one child. Belinda and her husband, Johnny Cormier, and son Paul make up Fontenot's immediate family.

But they are hardly his only family, as proven by dozens of birthday cards from second and third cousins piled up in front of him.

Ray attends family reunions annually. Except in 2020, of course.

"I've had pretty good health all these years and I've made history on my father's side of the family, the first one to reach 100," Fontenot said. "But I've lost all of my friends my age." 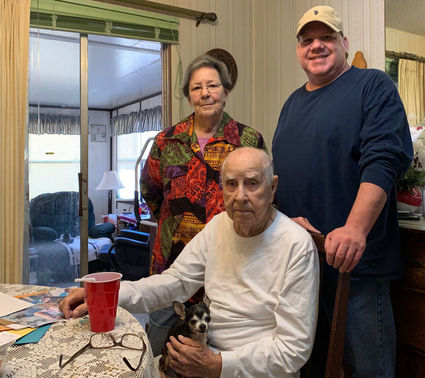 On the big day of his 100th birthday, his daughter relayed a request to name his favorite baseball player and Fontenot looked puzzled.

He thought she asked him to name his favorite breakfast place.

But there was no hesitation when she asked him to name the favorites of all the presidents his life has seen.

"Roosevelt, Eisenhower and Clinton," he said. "I'm not going to tell you about the worst."

While clearly not wanting to say anything that would cause a stir, Fontenot acknowledged another worst on his list included the state of the union.

He will be watching for a solution in his second 100 years.