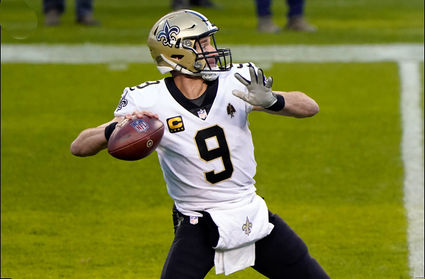 This is my annual National Football League "Wild Card" Playoff column and I had no idea what the Las Vegas odds were on the six games being played this weekend.

Then a brainstorm hit me. Why not get some help from our newest resident Alexa. She supposedly knows everything.

So, I asked her, "Alexa, please give me the odds on this weekend's NFL playoffs."

She replied in her usual sweet voice, "Why, Mr. Joe, I'm waiting for your Korner to come out and tell ME the betting lines, so I can relay them to whoever asks me for them."

I guess I'll just have to do my usual guessing on the odds and the projected winners just like I have for the last 50 years.

Seriously, though, this was a weird football season for the NFL, which managed to play every scheduled game, but mostly without the teams full 53-man rosters. In fact, some teams-like the Dallas Cowboys and perhaps the New England Patriots-are sitting home watching the playoff action because of injuries and the coronavirus pandemic.

In fact, the Cowboys had an outside chance of getting into the playoffs as the NFC East Division champions if they beat the Giants in New York (which they didn't) and Washington Whatever Their Name is This Week lost to Philadelphia (which they didn't). Consequently, the Dallas Cowboys are home watching the playoffs on TV just like you and I will be.

The Kansas City Chiefs enter the playoffs as the No. 1 seed due to their best 14-2 record. They lost 38-21 to the Los Angeles Chargers in Sunday's season finale, but sat out many of their impact players like quarterback Patrick Mahomes, tight end Travis Kelce and several others. They will play the lowest-seeded team in two weeks.

The same is true for the Green Bay Packers, who played most of their regulars because they needed a win to be the top-seeded team in the NFC.

This weekend features several "grudge matches" in this wild card playoff round with the Baltimore Ravens at the Tennessee Titans leading the parade.

If you'll remember in last year's playoffs, the Titans dethroned the Super Bowl-favored Ravens, knocking them out of the playoffs and then coming back and turning the trick again 30-24 in October during the 2020 regular season.

But Tennessee didn't have a playoff berth until Sunday against the feeble Houston Texans, who wouldn't go away and made the Titans kick a 50-yard, game-winning field goal to edge out Indianapolis for the AFC South Division title. Tennessee will have their backs against the wall Sunday with Baltimore being a slight 3½-point favorite.

Another big rivalry this weekend will be Cleveland at Pittsburgh Sunday at 7:15 p.m. a week after these two teams finished the regular season with the Browns winning 24-22 with several of the Steelers like quarterback Ben Rothlisberger sitting out. But the game may not be as close in the playoffs with Pittsburgh favored by four points.

Cleveland has been absent from the playoffs since 2002-the longest active drought-- and enjoyed their first 11-game winning record since 1994 thanks to 1,000-plus rushing yard seasons from the Browns two running backs Nick Chubb and Kareem Hunt.

Seattle and the Los Angeles Rams should be a grudge match, too, with both teams coming from the NFC West Division. The two teams split their two games during the regular season and meet in Seattle Saturday at 3:40 p.m. with the Seahawks favored by 4½ points.

The other AFC playoff game features Indianapolis at Buffalo where the high-scoring Bills are a whopping seven-point favorite. Buffalo finished the season with 501 points, second only to Green Bay's 509. It was the second-most points scored in Buffalo franchise history.

The largest point spread this weekend belongs to the New Orleans Saints, who are favored by 9 ½ points over the fortunate Chicago Bears, who sort of backed into the playoffs with an 8-8 record. The two teams meet Sunday at 3:40 p.m. in the Superdome.

Chicago was pummeled 35-16 by Green Bay but earned the final wild card when the Arizona Cardinals lost to the LA Rams 18-7 Sunday.

Brady kept his streak alive by never missing a playoff as a starting quarterback as he led Tampa Bay to an 11-5 record and a wild card berth against Washington, whose 7-9 record made it an eight-point underdog Saturday at 7:15 p.m. in the nation's capital.

KWICKIES...It's a crying shame that the Houston Texans flopped so badly this season, despite the magnificent year quarterback Deshaun Watson put together. The two big factors in the Texans' 2020 demise are the boneheaded trades former coach Bill O'Brien made which led to an 0-4 start and his firing, and the coronavirus, which affected every NFL team.

Randy Crouch announced this week he is retiring from Little Cypress Mauriceville High School at the end of the 20-21 school year. Crouch spent 55 years of either playing or coaching. He was head coach and athletic director of the Battlin' Bears for the last 12 years and he was an assistant for 4 years. Compiling a 52-69 record in his 12 years and 34-38 in District Play, making the play offs for 6 seasons. Crouch was an offensive lineman and named one of the top 50 All Time football players at Louisiana Tech after being a high school All American at Sulphur High School in 1971.

Texas A&M's 24 points scored in the fourth period Saturday night against North Carolina were the most scored in the final quarter of the Orange Bowl since Oklahoma did it in 1958.

And speaking of the Aggies' impressive 41-27 Orange Bowl victory, it gave Head Coach Jimbo Fisher a 3-0 record in a bowl game for the Aggies. He had a 5-2 bowl record at Florida State.

If the Dallas Cowboys had gotten into the 2021 NFL playoffs, quarterback Andy Dalton would have collected a $1 million bonus for the feat.

Tennessee Titans tremendous running back Derrick Henry, who went over the 2,000 rushing yards barrier, is only the eighth player in NFL history to accomplish that feat.

JUST BETWEEN US...I don't know whether it's a coincidence or factual, but since I began writing this column more than half a century ago, it seems that our state's two main schools-Texas A&M and the University of Texas-fires their head football coach whenever the other school is doing well. It just happened in Austin Sunday when "the big money people" decided to get rid of Tom Herman, despite having four winning seasons but no Big 12 championships and replacing him with Steve Sarkisian, who had been head coach at Washington and Southern Cal. The price for making the move was a $15 million buyout of Herman's contract. The same thing happened to Orange native R.C. Slocum a couple of decades ago, who was and still is the Texas Aggies' winningest coach. They gave him a nice "golden parachute," too, and until this season A&M was never a team to be reckoned with among the nation's elite college football teams.