Orange County's man in Austin is state's too 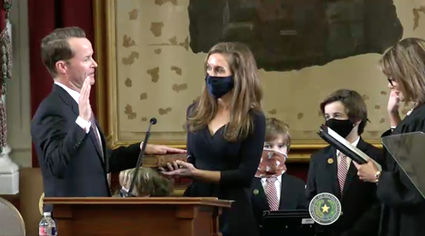 Rep. Dade Phelan (R-Beaumont) repeats his oath of office as Speaker of the Texas House of Representatives while his wife, Kim, holds the family Bible Tuesday in Austin. Phelan's District 21 includes Orange County.

Talk about a landslide.

Dade Phelan, Orange County's man in the Statehouse, won support from every corner of the state and sailed into the 87th Texas Legislature Tuesday as the Speaker of the House.

The Beaumont native, who represents District 21, which takes in much of western Jefferson County, much of Port Arthur and all of Orange County, was elected by a 143-2 vote with four members not voting.

The area was well represented on Phelan's big day.

Rep. Joe Deshotel (D-Beaumont), who represents Beaumont, most of Mid-County and part of Port Arthur, introduced Phelan after the vote.

His nominating speeches were given by Rep. Will Metcalf (R-Conroe), Rep. Nicole Collier (D-Fort Worth) and Rep. J.M. Lozano (R-Kingsville), illustrating the diversity of Phelan's support and the way he works across the aisle.

The Legislature's 140-day every-other-year session will deal with the requirements of drafting a two-year budget and redrawing the state's political maps based on population movement noted by the decennial U.S. Census against the backdrop of the ongoing public health crisis caused by the coronavirus.

"Texas children and educators must continue to be at the forefront of our legislative agenda this session," Phelan said. "Texas children are at risk of falling behind because of disruptions caused by the pandemic. We cannot fail them when they need us the most.

"To get Texas back to work, we must protect our citizens' lives and safeties. We must revitalize our economy. We must reduce burdensome regulation that impedes our business climate."

His short speech recognized the change in the landscape since the last Legislature adjourned in 2019, including the pandemic and divisive politics capped off by last week's assault on the U.S. Capitol.

"During this, our 87th session, we have the opportunity to lead by example and work on real issues of real significance for the people of Texas. I encourage everyone ... to work together for the betterment of Texas." 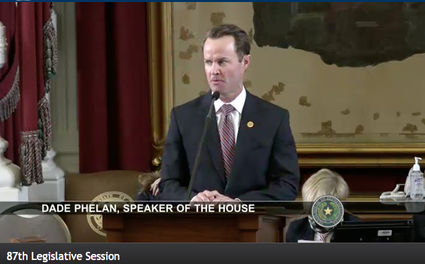 Phelan, 45, noted early in his remarks that he had worked at the House as an aide 27 years earlier while a student at the University of Texas.

In 1998, he worked in the House for State Rep. Mark Stiles. After graduating UT, Phelan moved to Washington, D.C., to work for U.S. Rep Dick Armey, and in 2001, was back in Austin working for State Sen. Tommy Williams.

After the retirement of Rep. Allan Ritter, Phelan won the House Seat for District 21 in 2015. He ran unopposed in 2020.

On Nov. 4, the day after the election, he announced he had enough votes to take over for as Speaker of the House.

Phelan's wife, Kim, is a lawyer. The couple has four children, Ford, Mack, Hank and Luke.