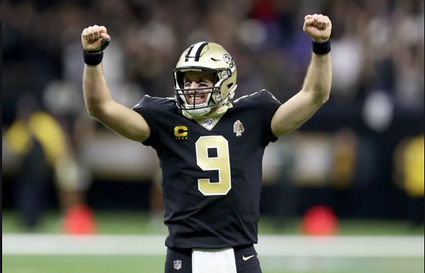 The opening round of the National Football League-the Wild Card Round-was designed to give some of the league's better teams that didn't win a division crown a taste of the post-season playoffs and of course, to generate extra income for the league and the teams good enough to qualify.

Nobody will ever deny that 2020 was an unusual year for almost everybody in some form or another. Sports suffered dramatically especially on the high school and collegiate levels with many events either postponed or merely canceled.

Major league baseball was able to have a much-shortened 60-game schedule, the NBA held its post-season playoffs at one facility in Orlando, FL. and most college football seasons were either shortened or canceled entirely.

But the NFL was able to have a full 16-game schedule for all 30 teams with a playoff format that added an extra wild card team from each conference, jumping the number from the usual 12 to 14 teams, with the top team with the best record from each conference earning a first-round bye.

And to conform with the weird year that just ended, this year's Wild Card Playoff was a godsend for those wild card teams as four of them came through the first round of last weekend's games with victories. All but one of the wild card winners-the Tampa Bay Buccaneers-could be categorized as an upset victory.

The first upset occurred in Saturday's second game when the runner-up Los Angeles Rams traveled to Seattle to take on the NFC West Division champion Seahawks and pretty much dominated the action, winning 30-20.

And as the old saying goes, "offense wins games but defense wins championships" the Rams defense made life so miserable for Seattle quarterback Russell Wilson that he completed only 11 of 27 passes for a very sub-par 40.7 percentage, the second worst of Wilson's career.

And ever since Seattle Coach Pete Carroll disbanded the Legion of Boom defensive backfield, opponents have been running up big scores on Seattle, forcing Wilson to outscore them with his passing and running, which he had done.

It was pointed out on ESPN Monday morning that the Seahawks have not gotten an impact player in the first round that worked out for them in 10 years since they drafted Orange's Earl Thomas in the first round. But when it came time to extend the contracts of both Thomas and Wilson, Seattle gave their quarterback the big bucks and sent Earl packing.

Another third match of the season occurred in Pittsburgh Sunday night when the Cleveland Browns opened the game by recovering a snap over Steeler quarterback Ben Roethlisberger's head in the end zone for an easy touchdown.

Things went from bad to worse for the Steelers, who found themselves behind 28-0 before the first quarter was over and 35-10 at the half.

Although Roethlisberger threw for 501 yards and four touchdowns, his demise came with the four Cleveland interceptions, as Pittsburgh fell too far behind to catch up and were eliminated from the playoffs by Cleveland's stunning 48-37 victory.

Teams that were supposed to win and advanced to this weekend's Divisional Round were the Buffalo Bills-27-24 winners over scrappy Indianapolis--New Orleans-which stymied the Chicago Bears 21-9-and wild card Tampa Bay which downed NFC East champ Washington 31-23.

Perhaps the best match-up this weekend will occur at Buffalo when the Bills entertain the red-hot Baltimore Ravens. Both are high-scoring teams with quarterbacks that like to run with the football. Buffalo moved on in the playoffs for the first time since 1995.

Although Baltimore benefited from a schedule featuring the five weakest teams to finish the season with five victories, quarterback Lamar Jackson finally got the monkey off his back by winning a playoff game Sunday when the Ravens pounded out 236 yards on the ground (136 by Jackson).

Baltimore's defense stymied Tennessee's Derrick Henry, holding him to 40 yards on 18 carries. My Upset Special of this week is Baltimore beating the Bills Saturday.

However, the game that should get the most hype this week is Tampa Bay at New Orleans which will feature the NFL's two graybeard over 40-year-old quarterbacks-- Tom Brady of the Buccaneers and Drew Brees of the Saints-as New Orleans tries to beat Tampa Bay for the third time this season.

The 43-year-old Brady has started in more than 40 playoff games while Brees could very well be playing for his final Super Bowl as he's been hinting of retiring all season long.

Brady, who has set many NFL records, broke another one Saturday that had lasted for 50 years, passing George Blanda to become the oldest player to throw a touchdown pass in a playoff game.

Only six times in NFL playoff history has a quarterback rushed for 200 or more yards and Baltimore's Lamar Jackson has done it twice. The other quarterback to do it was Colin Kaepernick, and he also did it twice a few seasons back.

When New Orleans quarterback Drew Brees connected with Michael Thomas on an 11-yard touchdown pass in the first period of Sunday's 21-9 win over the Chicago Bears, it marked the 17th consecutive playoff game in which Brees has thrown a touchdown pass.

JUST BETWEEN US...When the Houston Texans hired Nick Caserio as their new general manager, it really threw quarterback Deshaun Watson's nose out of joint. He was under the impression from all the hype the week before that he was to be involved in the hiring of their new general manager and new head coach. The front office is doing everything it can to soothe their franchise quarterback, who refused to return any phone calls and has even hinted of demanding a trade. The soap opera never stops on Kirby Drive in Houston.