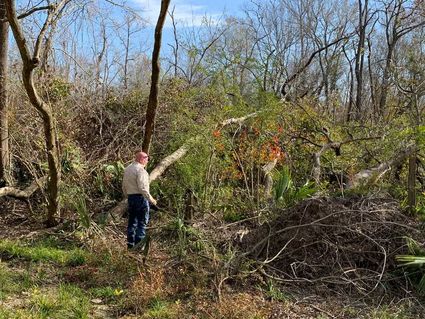 The Orange County Drainage District has some good news for Orange homeowners along the Cow Bayou, Adams Bayou and Little Cypress Bayou.

Don Carona, general manager of the Drainage District, announced Tuesday that the Natural Resources Conservation Service (NRCS) had authorized a grant of up to $1.5 million on a $2 million project that will remove trees blown down by Hurricane Laura from the banks of those key Orange County waterways.

On Monday, Tommy Clary, whose north Orange property is on the banks of Adams Bayou north of I-10, led a tractor-pulled hayride tour of the damage done last August by Laura and made worse by October by Hurricane Delta. Both storms packed winds clocked in excess of 100 mph in the county.

Among those who went along were Orange city council members Paul Burch and Brad Child. Other invited officials were unavailable due to the Martin Luther King Jr. holiday.

What Clary showed them were thickets of small trees blown down and lodged between still-standing trees.

The homeowner pointed out that the bayou was full of fallen trees or those leaning from the bank and blocking the flow downstream.

"We live too close to the Gulf of Mexico not to have any drainage," Clary said. "If the water can't go anywhere, it's going to your living room.

Clary would like to see a cleanup effort that would remove all the downed timber on either side of the levee road.

The Drainage District and its contractors will only be able to pick up trees within reach of a grapple arm mounted on barge in the bayou.

A similar $1 million "desnagging" effort that trimmed overhanging vegetation and pulled up and out trees that were leaning at least 45 degrees toward the water was performed by the Drainage District on Adams Bayou 18 months ago.

"After Hurricane Harvey, money we received from the NRCS helped fund the removal of fallen trees and vegetative debris from Adams Bayou and Cow Bayou," Carona said.

"After Laura, it's hard to believe but we're back at it again. There are a significant amount of trees fallen in the bayous."

"Calling it desnagging got me off their case," Clary said of the Drainage District. "But that bayou needs to be dug out

Clary says he'd like to see a thorough cleanup of the waterways that eventually drain through lower Orange County and into the Bessie Heights Marsh or Sabine Lake.

Then he'd like to see a regular bayou maintenance program.

That includes dredging, which he says hasn't happened for Adams Bayou since 1959.

"From 1934 to 59, you wouldn't believe all the dredging they've done here," Clary said, citing research he'd done in newspaper archives.

He said they are not allowed to take a tree from the bayou banks unless it is leaning at least to a 45-degree angle. And work in Bessie Heights Marsh falls under the rules of the Texas Parks and Wildlife Department.

"They regulate wildlife, and an operation like this may affect wildlife, including birds and their nesting grounds."

Good news about the bayou project is it has a deadline, just nine months to complete the work. And the clock is already running, Carona said.

"While we're in the regulatory process, we'll begin the process to solicit outside contractors," he said. "We're going to get a barge with a grapple and saw on it." 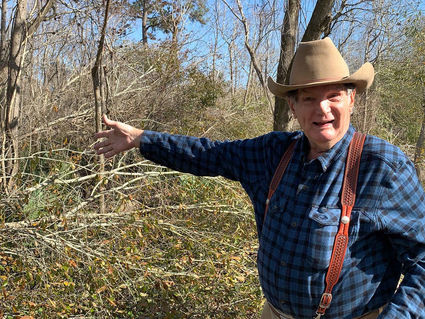 Tom Clary, North Orange homeowner, explains Monday how he believes trees downed by the winds of Hurricane Laura, are adding to flooding hazards along Adams Bayou.

Another project in the works for the Drainage Ditch, in a joint venture with the Sabine River Authority, Jasper, Newton and Orange counties, is to enlarge and improve the Sabine Relief Ditch.

That ditch, which Carona says has been around since at least 1934, runs from just south of the northern Orange County line to the Sabine River near the intersection of Interstate 10 and 16th Street.

"The obvious reason why it was put in was to divert water to the Sabine River," Carona said. "In its current form it helps dramatically in portions of Mauriceville and other areas.

"We have applied for funds to improve and intercept and direct overflow to Cow Bayou. The design will include a pump station."