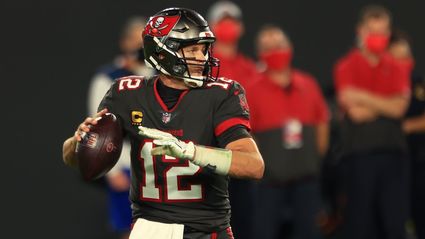 I predicted in last week's Korner that the Tampa Bay-New Orleans Divisional Playoff game would by hyped more than the other three match-ups.

The focus of the media was about the head-to-head battle between the two oldest quarterbacks today in the National Football League-the Buccaneers' 43-year-old Tom Brady and the Saints' 42-year-old Drew Brees.

I also pointed out that it was almost an impossibility for one team to beat the other three times in one season.

Well, it didn't happen Sunday in the Mercedes-Benz Superdome in New Orleans, but it was because Brees had an off-day while Brady used his experience of winning the game in the fourth period or overtime. Brees has hinted that Sunday may have been the final NFL game of his career after hinting all season of retirement.

Brees had three interceptions in a playoff game for the first time in his long career while Brady led his team to the conference championship game for the 14th time in his career by upsetting the Saints 30-20. Tampa Bay scored 14 points from the Saints' four turnovers.

The game was pretty much nip-and-tuck with the first half ending in a 13-13 tie and then 20-20 going into the final quarter. Brady was at his finest in the fourth period as he led the Bucs to a 36-yard field goal by Ryan Succop and scored the clinching touchdown himself from one yard out.

Now Brady will be facing another greybeard quarterback in Green Bay's 37-year-old Aaron Rodgers Sunday, who led the Packers to an impressive 32-18 over the Los Angeles Rams and their No. 1 defense, giving the Packers a chance to win their ninth NFC championship.

The Packers are an early 3½-point favorite, most of which comes for having to play in freezing temperatures with a chance of snow.

Rodgers, who is the favorite to win the 2020 Most Valuable Player Award, threw for two touchdowns and ran for another, notched his eighth-straight playoff game with multiple passing touchdowns which is the longest streak in NFL history.

Brady, who will be playing in his 32nd playoff game, will either be loved or hated by the fans in this game. His key to winning will be to find a rushing game and having enough time to find his targets.

I'm one of those fans who won't shed any tears if Brady's Buccaneers lose and am predicting a 38-31 Green Bay victory Sunday.

Both of the favorites in the AFC Divisional Playoffs came through with victories as expected, as the Buffalo Bills defense had one of its best games of the season, completely thwarting the Baltimore Ravens offense, limiting them to a first-half field goal and advancing to meet the defending Super Bowl champion Kansas City Sunday at Arrowhead Stadium.

The Bills' defense completely throttled the Ravens and their franchise quarterback Lamar Jackson, forcing them to their inept passing game and outclassing them 17-3 Saturday night. Jackson left the game late in the third quarter under the NFL concussion protocol and undrafted rookie Tyler Huntley took over the Ravens quarterbacking chores.

And it was the concussion protocol that ended Sunday's playoff game for Kansas City quarterback Patrick Mahomes, who was hit hard on a third period quarterback sneak with the Chiefs ahead 19-10. Back-up Chad Henne, an 11-year NFL veteran in his second season at Kansas City, took over and led his team to a 33-yard field goal by Harrison Butker.

After Cleveland scored a touchdown early in the fourth period narrowing the Chiefs lead to 22-17, the Browns were forced to punt on their next possession with eight minutes left. That would be the last time the Browns would touch the football.

Henne really earned his keep in the final eight minutes, moving the football downfield and eating up the clock. After getting sacked, he faced a third-and-14, couldn't find an open receiver and decided to run.

It was apparent he was going to be short of his mark and launched himself toward the first down marker and came up one yard short. So, with fourth-and-one, instead of punting from midfield, Head Coach Andy Reid called for a pass to the right flat which was caught by wide receiver Tyreek Hill who wisely sat down in bounds after making the first down.

Henne then went into a victory formation to kill the remaining 90 seconds and sent his team to the AFC championship game against Buffalo at 5:45 p.m. in Arrowhead Stadium.

Even though Mahomes' status will be determined by the independent neurological doctors later this week, I believe he will play and win 27-21, covering the early 3-point line on the game.

But history said it will be close as 29 NFL quarterbacks did the concussion protocol and the median time of their return was seven days.

KWICKIES...Houston Astros general manager James Click is trying to beef up the pitching staff by adding free agent reliever Pedro Baez and Ryne Stanek to the mix. Click promises there will be more moves made before spring training next month.

I can't believe Lamar University is joining the old defunct Western Athletic Conference and leaving the Southland Conference after so many years. That will certainly kill the rivalry between the Cardinals and McNeese State in Lake Charles.

The Kansas City Chiefs will be the first AFC team to ever host three straight Conference Championship games. The Philadelphia Eagles of the NFC did it from 2002 to 2004.

JUST BETWEEN US...I believe by the time this column hits the streets Wednesday, the Houston Texans will be looking for a new quarterback. Deshaun Watson, who carried the team on his back the entire 2020 season, is through playing for the team because the front office didn't invite him to have a voice in the hiring of a new general manager and head coach like they promised earlier. He can't play for a team he doesn't trust and wants out. His actions definitely will affect who the new head coach will be. Many of them are reluctant to work for an organization that talks out of both sides of the mouth.