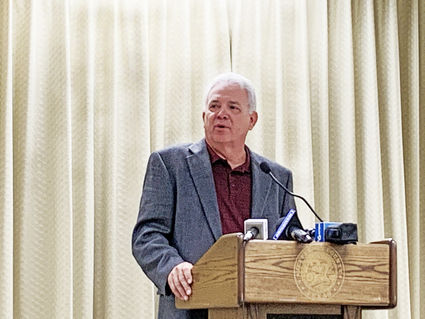 Orange County has joined a five-county Southeast Texas group in an effort to get more COVID-19 vaccines into the arms of its citizens.

John Gothia, Orange County judge, said the goal is to establish one or more permanent vaccination hub sites and possibly a mobile vaccine unit for use in Orange, Hardin, Jasper, Newton, and Jefferson Counties.

By combining their public health resources and populations, the resulting "consortium" covering a population of nearly a half-million residents would be able to guarantee the state that it has the ability to give out 22,000 vaccinations per week, which Gothia explained is a requirement to be

In the meantime, residents 65 years of age or over, or those aged 16-64 with a chronic medical condition are urged to pre-register for vaccination online at vaccine.beaumonttexas.gov, or by phone at 409-550-2536.

"But scheduling will not be done until we know we have significant vaccine for those in category 1A and 1B."

Gothia said the first permanent hub would be at Ford Park in Beaumont.

"But if we get the full 22,000 doses we're asking for, we could have a hub in Orange County," Gothia said

A mobile unit would be in one county for a day or two at a time as were the mobile testing sites in the spring and summer.

Members of the consortium named at the press conference were the public health authorities of Jasper, Newton, Hardin, Orange and Jefferson Counties, along with the cities of Port Arthur and Beaumont and the Riceland Healthcare Centers, which has operations in Beaumont, Winnie, Vidor and Woodville.