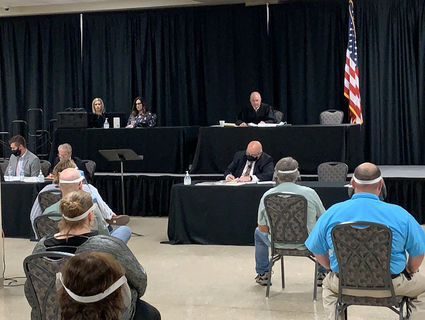 Judge Steve Parkhurst of the 360th District Court of Orange County, center back, explains the process of jury selection to prospective jurors Monday morning at the Orange County Convention and Expo Center.

Jury trials are on the docket again in Orange County.

They restarted at the first of the year locally after a nine-month halt because of the coronavirus pandemic.

The county's jury selection, which began its every other Monday schedule with more than 100 citizens this week, is taking place in the ballroom of the Orange County Convention & Expo Center, to allow plenty of social-distancing room.

"We've been having everything but jury trials," Steve Parkhurst, 260th District Judge, said when asked what he'd been doing since April.

"We've been going about it pretty much like business as usual."

Over a video call.

"Most of our hearings have been conducted by Zoom, criminal cases and civil cases as well. You turn on the computers and get on Zoom and conduct the case.

"We've been having several Zoom hearings a day," Parkhurst said.

"But the absence of jury trials has slowed things down."

The judge said it's been a good thing there hasn't been a lot of jail inmates who have requested trials.

"Now we're trying to get to those cases first, the people in jail that want jury cases," he said. "And what we're trying to do, especially at the start, is do the cases that aren't so complicated.

"We don't want people [jurors] sitting up there for hours a day. So far, it's worked out extremely well, I thought. Nobody complained."

Of the 100-plus who showed up for Monday's 9 a.m. jury call, nearly two dozen were dismissed in the first 30 minutes, leaving two jury pools of 40 prospective jury members for two separate trials to be held by Parkhurst and 128th District Judge Courtney Arkeen.

Questioning by defense and prosecution lawyers in a process called voir dire picked the two 12-person, one-alternate juries by noon.

Tuesday, the juries joined the lawyers and court staff back in the Orange County Courthouse, in the judge's normal courtrooms.

Only three jury members sat in the jury boxes, the rest were spaced apart on the front rows of the courtroom spectator seating. The county provided face shields for everyone.

The case in the 128th was over by lunchtime, the testimony short and the jury quickly reaching a verdict. 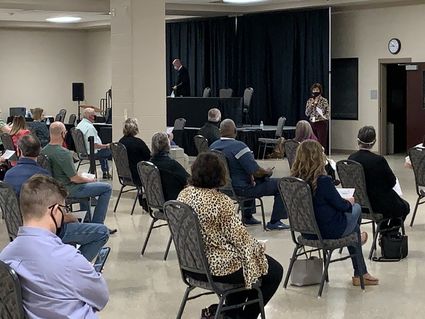 Parkhurst said his criminal mischief case included only three witnesses, but the jury needed a lunch break before reaching a not guilty verdict and clearing the courtroom about 2:30 p.m.

This was Parkhurst's first trial since the courts went virtual in the spring. The defendant in his trial set for Jan. 11 pleaded guilty at the last minute.

"If there are people in jail, we need to get their cases done," the judge said. "Plus, criminal trials are faster, usually, than civil trials.

"Some civil trials take three weeks. I'm just not ready to make people sit through that. I don't think it's fair to the jurors."