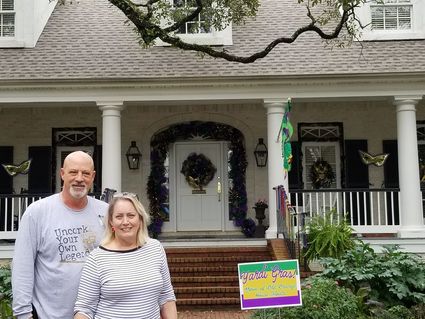 When Beth Wheeler saw pictures on Instagram of "house floats" in New Orleans, La., she realized it would be a great COVID friendly alternative in Orange, in place of the cancelled parades. It is also an opportunity to showcase some of the beautiful homes in the historic district.

Her husband, Kenneth Wheeler, presented the idea at a committee meeting for the Old Orange Historical District and became the organizer for the event.

They are constantly updating a map as homes join Orange's first "Yardi Gras." Instead of standing on the side of the road watching parade floats go by, participants will get in their car and drive along a route to see homes decorated as floats; sort of a parade in reverse. "Everybody can drive through, like looking at Christmas lights. Nobody is going to be harassing you. Nobody is going to be in the streets throwing things at you, its COVID safe," Kenneth said. "There are seven just here on Pine Street."

Originally 10 homeowners agreed to decorate their homes, then, it jumped to 20.

"There may be 30 when it's all said and done," said Beth. The goal is to have all the houses decorated by Feb. 1. "People are already starting to drive by. We're definitely not finished."

They will print flyers with a map of homes soon said Mr. Wheeler. There will likely be more homes decorated than are on the map, because they will have to cut it off this week to get the flyers printed and distributed.

In New Orleans, the idea originally came about as a way to keep the multitude of Mardi Gras artists employed. Mardi Gras is their main source of income and this would be the second year of cancellations.

"We don't have a lot of float artists in Orange," said Beth, as she laughed. She said items from past floats can also be rented over there "So, those in New Orleans are going to be fantastic because of that." She said locally it might not be as impressive, but they are having a lot of fun with it. Mardi Gras decorations have been in short supply locally since things were cancelled. Most homeowners are making large decorations and have had to rely heavily of purchasing materials online.

For the Wheeler's home, they created large cutouts representing the age old tradition of the chicken chase or Courir de Mardi Gras, which is still held in some smaller communities of Louisiana. It was a tradition the Wheelers travelled to Iota, La every year to witness, until COVID-19 hit.

"It's something to see," said Beth.

Beth is also painting a pair of large alligators that will be perched over the porch. 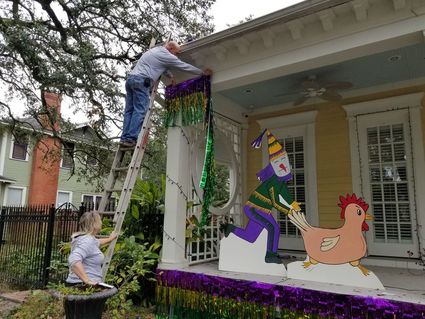 The Wheelers are also decorating the old one room school house on 7th street. They purchased the home earlier this year and are in the midst of renovations. Silhouettes of jazz musicians and 2nd line dancers grace the porch and balcony along with a massive voodoo doll. The Wheelers are also waiting for cutouts that look like NOLA storefronts to arrive, to finish of the home's look.

The hope is Yardi Gras will become an annual event, even after the parades and other activities return.

"Now's the time to drive and rediscover downtown," said Beth.

"We've got several beautiful old homes around here for sale, as well," said Kenneth, "we'd like to get some more attention to that."

Homes will be decorated for viewing Feb. 1-16. There will be a few that will still be in progress due to shipping delays for decorations, so you may want to make more than one tour. The historic district runs from Green Avenue to John Street, then from 15th Street to Simmons Drive. The other portion that is considered the 'DuPont homes' runs from Burton Avenue to Park Street to 16th Street.