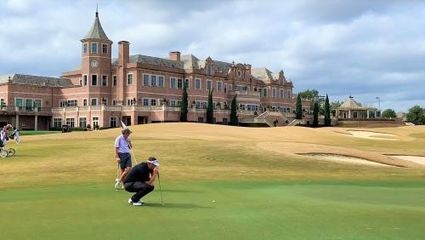 Little Cypress-Mauriceville High School Senior Jack Burke was honored for the third year in a row with an invitation to play in the Aggie Cup Invitational hosted by A&M Consolidated in College Station. The two-day event hosts some of the best high school teams and individuals in the state. Austin-Westlake, Austin-Lake Travis, Dallas-Highland Park, Georgetown, Vandagrift, and Houston Memorial where part of the tourney again this year. The field included nearly twenty D-1 college commits. Burke (above on #9 green in front on Miramont’s majestic club house) battled 20-25 mile winds to fire a 79 on day one at Traditions Club and followed that up with an even par/72 at Miramont on day two to finish 14th in the 72 player field. Burke and the Bears will play their first team event of the season next Monday at Rayburn Country in Jasper.