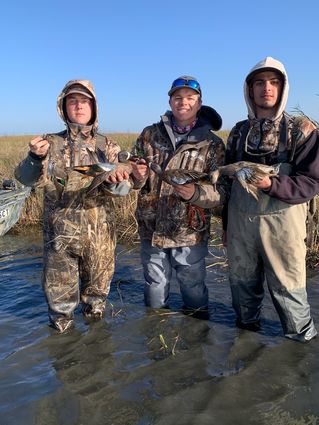 Most local hunters have been taking advantage of the numbers of teal in our area to fill straps.

Local waterfowl hunters finish off their main season this weekend and for many it will be welcome sight. Ducks and geese locally been beyond sparse and just down right non existent in many areas. A few hunters are still grinding away at some smaller concentrations of birds and having a few good hunts but those are few and far between. The biggest majority of the birds still hanging around locally are mostly green winged and blue winged teal without h a few gadwall thrown in for good measure. Overall the numbers are slim but you can't shoot them while sitting on your coach so get all you can because it'll be months before we get to chase them again.

Normally when regular duck season ends there is a big push of attention thrown towards the snow goose conservation season. Areas in Arkansas, Missouri, Kansas, and even farther north become magnets for hunters wanting to cash in on some non stop action. In most of those states mentioned they don't hunt the snow geese during the regular season, instead they let those numbers of birds build to huge concentrations and then once the regulations are eased they move in for some impressive shoots. If you have never done a snow goose conservation hunt you owe it to yourself to do it, you won't be sorry.

Once the snow goose conservation season begins many hunters will opt outfit their shotguns with extended magazines in order to take advantage of the new rules. Shotguns must not hold more than 3 shells, 1 in the chamber and 2 in the magazine, during the regular waterfowl season. Once the conservation season kicks off you can carry as many shells as you want, popular models will hold as many as 10 shells. Of course the magazine extensions are legal at the moment and have been for quite some time but who knows what will happen in the future with this administration and their dislike for gun owners. At this point in time all of those, myself included,  who have been described as "Bubba Trump" are being targeted for a whole host of new laws and restrictions surrounding weapons and magazines where huge fines could be levied against those in possession of certain guns and ammo. The future of the shooting sports is definitely facing some irrational challenges from the left and that will play itself out in the coming future.

For the time being local hunters will hit the marshes for the last weekend of the regular season before either heading north to take advantage of the conservation season or just shutting it down until next September when we start again. I'm quite sure a few of those hunters who have been after it all season will welcome February and the opportunity to start fishing again, at least for a while until they start thinking about next season and what to do when it gets here.