By Sherlock Breaux
For the Record

Sherlock Breaux in the Creaux's Nest 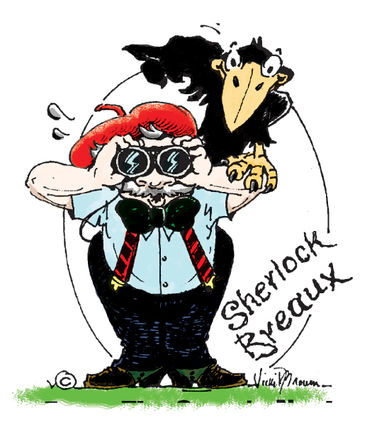 Come watch the cowboys in action. Two big days, Friday, February 5 and Saturday, February 6, at Tin Top Arena, 3810 Old Peveto Rd., Orange. The rodeo starts at 7:00 P.M. Pre-event tickets on sale at Sabine River Ford, $10.00 each or at gate $15.00 each. Trey and Amie Smith are the top management team for Sabine River Ford. Trey is the son of Ross Smith and is an Orange native. Sabine River Ford is locally owned and operated. The Smith’s are lifelong residents of Orange County.*****I’ve got to get going. Come along I promise it won’t do you no harm.

Senate Minority Leader Mitch McConnell went to bat for GOP Conference Chair Representative Liz Cheney while condemning remarks from freshman Rep. Marjorie Taylor Greene. McConnell issued a statement condemning the extremist views of Greene, whose support for QAnon and other conspiracy theories has drawn scorn from Democrats and some Republican Party. McConnell said the Georgia congresswoman’s embrace of conspiracy theories and “loony lies” is a “cancer for the Republican Party.” “Somebody who’s suggested that perhaps no airplane hit the Pentagon on 9/11, that horrifying school shootings were pre-staged, and that the Clintons crashed JFK Jr.’s airplane is not living in reality,” McConnell said. “This has nothing to do with the challenges facing American families or the robust debates on substance that can strengthen our party.”

TURNING BACK THE HANDS OF TIME

Arctic Express comes roaring in and will stay the rest of the work-week. Nighttime temperatures plummet into the 20’s and a deep, windy chill will be felt throughout the day. Despite this unusual cold, that could bring some snow, it is still considered mild in comparison to the inch of ice in the mid-section, including west and northeast Texas. A low of 26 degrees is expected all the way to the Rio Grande where citrus crops are in jeopardy. Trees will survive at 26 degrees and above. The 1983-84-89 freeze in the Valley destroyed most fruit trees at 24 degrees. (Editor’s note: This put Roy out of the citrus business.)***** Dr. Jamey Harrison, named “Citizen of the Year” by Bridge City Chamber of Commerce. A lot of deserving citizens were nominated but none more deserving than Superintendent Harrison.*****We are indeed honored that the Bridge City Chamber named the Penny Record 'Business of the Year.' For over 50 years, we have been the local community newspaper and it's great to be recognized by such a fine group of folks who care about our community.*****Thursday, Feb. 3, ushers in another Lunar New Year. The year 2011 will be represented by the Rabbit. The past 12 months were under the Tiger. The year of the Rabbit comes around every 12 years, 1951-1963, 1975, 1987, 1999, 2011. It is said that life slows in Rabbit years.***** At 8 a.m. on Feb. 1, 2003, eight years ago, a big bang was heard in Texas, Arkansas and Louisiana, as a large flame was spotted in the sky. A 1:05 p.m. President George W. Bush declared, “Columbia is lost, there are no survivers.” Hemphill and East Texas was covered with debris. This week Hemphill opened the Patricia Huffman Smith Museum to remember the shuttle tragedy. Seven astronauts lost their lives. Kalpana Chawia, Laurel Clark, Ilan Roman, Rick Husband, William “Willy” McCool, Michael Anderson and David Brown. Also included in the museum are Charles Krenek and “Buzz” Mier, who died in a helicopter crash during the search. I understand it’s a nice museum to visit and remember those who died.*****Our longtime friend Randy Becker has been manager of Market Basket in Mauriceville for 21 years will now be manager of the “Mother Store” Bruce’s in Groves. Randy will continue to make Bridge City home.***** Our buddy Don Kachtik celebrates this week***Also pole-vaulting champion Eric Eshbach is a year older on Feb. 4. Dot Eshbach is his proud grandmother.***Next week, on Feb. 9, Karen Fuslier and her friend Jivin’ Gene Bougious celebrate their birthdays.***** Happy anniversary to Johnnie and Millie Spears, who celebrated 62 years together. I’ve known these special people over 50 years.***** Our thoughts and prayers go out to our longtime friend Johnny Preston “Running Bear” Courville. Johnny has been in ICU at Beaumont Baptist since before Christmas. He is in ICU 218 and is in critical but stable condition. Only his immediate family can see him. He had heart surgery back in December and his wife Sharon and son Scott remain by his bedside. Johnny had been touring throughout Europe. He has one of the greatest voices to come out of this area. In his early career he toured with the Beatles. He and this writer caught the last Elvis show in the Houston Astrodome together. (Editor’s note: Johnny died March 4, 2011.)

GONE BUT NOT FORGOTTEN

The 580-foot ship Cannes, seized by the Coast Guard with five tons of cocaine on board, is docked at CBH Services in Orange. The street value of the cocaine is $375 million and was the biggest bust in Texas. *****Beverly Vincent was named BP&W’s “Woman of the Year. She and Gabe also celebrated 31 years together Feb. 3. *****Terry Lyons is celebrating 20 years in radio. He was hired in Jan. 1979 by radio station KOGT. What sets him apart from regular disk jockeys is that Terry sells advertising and produces radio spots yet Arthur E. “Terry” Lyons is blind and has been almost from birth. (Editor’s note: Terry died a few years ago. I believe it was from a heart attack.)*****County commissioner James Stringer broke his foot. I hear he broke it exercising. It’s called soldier’s break. That’s when boys are too heavy on their feet. *****Congrats to Joe and Mary Majors on their new grandson, Joe Charles IV, born Jan. 13.*****Vickie Parfait will host Jan’s Cajun Cuisine show Saturday afternoon while Jan takes a well-deserved rest. Vickie will be live from 12 to 12. A 12-hour show. *****Several Bridge City football players sign letters of intent. All stater Jeremy Stolfa will sign an a few days. Other signers are kicker Raun Bryant, Dalthan Juneau, Eric Bramblett, Bryan Wiggins, Daniel Kibodeaux, Jeremy Buckley and Dustin Denham. Quarterback Brad Miller, Charles Higginbotham and Shane Peveto still have paper work and test to complete before they can sign. *****Denver beats Atlanta 34-19 in Super Bowl. No one laid a hand on Denver quarterback Elway all day, not even pro-bowler Shane Dronett, who was double and tripled teamed throughout the game. *****Clay Dugas took his dad Louis to the game along with brother Reagan.

I heard from a few folks this past week. Barry Burton tells me his dad Tommy, who celebrated a birthday last week, is spending most of his time at the lake. He did plant a winter garden. Barry also mentioned that his uncle Owen had a procedure in Houston hospital last week. I don’t know any of the details but I’ll check with the former commissioner this week. *****The Lions Club had a meeting last week and they are shooting for a June carnival but I think that’s being optimist.*****Congratulations to Cassie and Jim Sharon Bearden on the birth of their new baby girl, Krewe Katherine, born Jan. 26.*****Van Choate is still doing his plant catering, not much more, just trying to stay out of trouble.*****A few folks we know who are celebrating this week. Attorney Nolan LeBlanc is a year older Feb. 3. That doesn’t stop him, however, from continuing to celebrate like a teenager.***Also celebrating today is Bridge City police officer Jesse Byrd.*****On Feb. 4, is state pole vault champion Erich Eshbach’s birthday. I lost track of his age but was ringside at the state meet when the 17-year-old won the championship.*****Feb. 6, a special lady Karen Cox Duplician, daughter of our late friends, Ms. Ginny and Neighbor Cox, celebrates today. I haven’t heard from Karen lately. I sure miss Cox.*****Feb. 9, I’ve known Gene Bourgeois since he was around 9 years old. He and our friend Karen Fuselier celebrate today. Since Gene has been 17 he has been known as Jivin Gene. He and I have a lot of stories about the 50’s and 60’s. What great times.*****It’s hard to believe that Friday, Feb. 5, will mark 16 years since Mary Fontenot died in 2005. I always think of Anna Hargrave and Margie Stephens who were such good friends of Mary’s. *****The late David Cagle’s wife Kathy, is now employed by Buna School district. She and her son are doing well but really miss David. It was nice to hear from Dean Crooks. Nothing changes much in Dean’s life, he just rolls on. *****I also had a nice visit with Kirk but he’s not spilling the beans on much. I keep waiting. I may have to go to the other source. *****I understand Eli Peveto, Lamar distance runner, is having a good year and aiming for higher goals. I need to find out more but it sounds good. *****It’s always great to hear from Judge Rodney Price. He’s such a nice guy. While in the service, he served much of his time in the United States Capital, the one he saw insurgents invade on Jan. 6.*****If we were back in the old Opportunity Valley News days, the “Office Hound” could have a field day with all the gossip going around. Breaux and Creaux don’t do the he’ing and she’ing expose’ but it was good for many cakes in its day. *****We are s till waiting on the call to get our COVID-19 vaccination. Until now they would not have given it to me anyway. I go back to the doctor this week and maybe after that I’ll get my call. I sure want that vaccine. *****If you are suffering hearing loss, don’t mess around with it. Get down to Brown’s Hearing Center and see one of the specialists about getting tested and fitted. They fixed me up three years ago and I’ve had excellent service. I hear about others who didn’t go to Brown’s being very disappointed with their hearing aids. You can’t beat Brown’s one day service. My brother-in-law had to send his off for three weeks. He’s so disgusted with his hearing aids that now they are in his dresser drawer, not being used. My aids from Brown have made a world of difference in my life. They are so small; most folks don’t know I wear them. I strongly recommend the folks right here at home since 1962.

CAJUN STORY OF THE WEEK

Otis Leger and Tommy Broussard were in Tee-Boy’s Bar and Grill when Peanut Abshire came in. Dem two, as usual, started raggin Peanut him, about not having no hair on his head.

Otis say, “Peanut, don’t you wish you had hair like dis, wat me and Tommy got hanh?”

“Well,” Peanut answer, “You tink you look sexy you but all dat hair get sweaty and dirty. I’m going to tole you two hairy birds something rat now.” “All us mens got da same testosterone and if you want to waste it on growin hair den you go right ahead.”

Not even the COVID-19 pandemic, or snow, could keep Punxsutawney Phil from getting his job done Tuesday, Groundhog Day. The great weather-predicting groundhog could not be stopped, forecasting six more weeks of winter after seeing his shadow during the annual spectacle at Gobbler’s Knob, in Punxsutawney, Pennsylvania. Over the 135 year-tradition, it is the 106th time Phil has seen his shadow. While the event usually draws thousands to the borough in Jefferson County northeast of Pittsburgh, this year’s festivities were all virtual. The exception: About a dozen members of Phil’s “Inner Circle,” a group of men in top hats who organize the event each year. Some cardboard cutouts of some previous attendees were placed around the tiny hill just outside Punxsutawney. Note: At 11:08 A.M., at Dunn’s Bluff, on Cow Bayou, Hoover, the Armadillo, also saw his shadow. Six more weeks of Orange County winter.*****That’s it for me this week. Stay safe, wear mask and practice hand washing. Take care and God bless