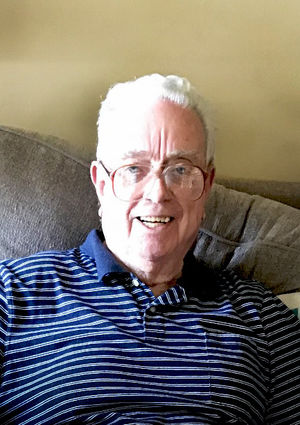 Milton Ted Matkin was born in Shreveport, Louisiana on April 11, 1933. He passed away as a result of advanced dementia in Allen, Texas on January 23, 2021 just three months before his 88th birthday. He was preceded in death by his wife of nearly fifty years, Mary Allie Matkin (Hilson), his parents, Milton Matkin and Lucille Davis, his sister Bobbye Lou Callaway, brother Jerry Davis, and his son-in-law Randy Kolar. Ted served in the United States Air Force for four years before marrying Mary in La Porte, Texas in 1959. Ted and Mary moved to West Orange later that same year and lived there until 1992 when they moved to Vinton, Louisiana. They raised three children in West Orange, Neil Matkin, and twins Lauree Kolar and Lisa White. Ted worked for Equitable Bag Company in Orange, Texas for forty-two years, most of those as Chief Chemist. He loved the papermill business and was an expert at matching colors and knowing what quantities of dyes to add to get the exact shades required. He worked a number of side jobs at various times including selling real estate, managing rental properties, and maintaining the facilities of a water company. After retiring from Equitable Bag at age 68, he sold dyes to papermills throughout Texas and Louisiana. In his younger years, Ted was an avid fisherman and hunter, and despite efforts by many to get him to play golf, he had no use for “pasture pool” as he called it. He loved working crosswords and playing cards although he hated losing. He especially enjoyed watching the Astros on TV and regardless of the number of channels available, the only ones that mattered were those that played reruns of the Andy Griffith Show, Gunsmoke, and the Western Channel. And, if The Good, The Bad, and The Ugly was on at any time of the day, he would stop what he was doing and watch it as it was after all, in his words, “the best movie ever made.” Until very late in life, Ted enjoyed mowing and spending time outdoors. He was a connoisseur of chicken fried steak, iced tea, and Blue Bell ice cream. He claimed there was no need for any flavor ice cream other than vanilla, but he did favor cherry vanilla when available. He finally admitted that he liked most any ice cream as long as it was cold. Ted is survived by his son, Neil Matkin; daughter-in-law, Janyth Clemons Matkin of Farmersville, Texas; and their three sons and families: Nathaniel and Autumn Matkin and great-grandchildren Ava and Artie, Aaron Matkin, and Benjamin and Caroline Matkin (expecting Esther Yvonne in April, 2021); his daughter Lauree Kolar of Orangefield, Texas and her two daughters and son and families: Ashley Kolar and fiancé Will Gross, Stephanie (Kolar) and husband Michael Hoffpauir and great-grandchildren Allie and Oliver, and Alex Kolar and fiancée Flavia Vancia; and his daughter Lisa and son-in-law Tony White of Broken Arrow, Oklahoma and their children: Joshua White and Kara (White) and her husband Dalton Franklin. Ted is also survived by his remaining siblings Max Davis and Judy Weaver. At the age of 84, Ted Matkin was baptized into the Lord Jesus Christ in Center, Texas. In the latter part of his life, he gave generously to many charities but favored St. Jude’s Children’s Hospital and the Alzheimer’s Association. Ted’s children have asked that donations be made to these charities or a charity of your choice in lieu of flowers to honor his life. A service honoring Ted will be held on February 7, 2021, at 11:00 a. m. at Forest Lawn Cemetery on Irving Street in West Orange, Texas with interment to follow. Family and friends are encouraged to share their memories of Ted during the service.