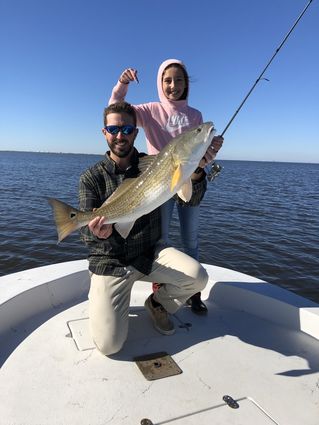 Madelyn Frederick won her tug of war with this solid redfish.

The combination of some seriously low tides and a little more north wind than needed are keeping Sabine Lake clarity on the muddy side, but the trout are apparently adapting to successfully hunting down their next meal. The most encouraging aspect is that most of these fish are in the two to three pound class!

The big trout are still missing in action, but improving numbers of solid fish is something to get excited about. It was a long time coming.

I have only had two opportunities to sample the bite recently, but did pretty well on both trips.I owe my success to a couple of local anglers that don't want their names mentioned and I don't know that I would have caught a single fish without the tip.

Simply suggesting that I fish slower than usual and stay in three to five feet of water would have helped, but I would probably have struck out anyway had they not shared a couple of starting spots. Both were also quick to remind me that the fish were there, but they were feeding in tight schools and I might have to wait them out.

When you have nothing else going, waiting them out is not a problem. It was also helpful to know that they were catching their fish on Corky Fat Boys and Devils. I initially thought I was a day or two late as my lure disappeared almost as soon as it hit the water. That does not do a lot for your confidence.

I was down to about thirty remaining minutes of little else than practice casting when the first trout finally just crushed my Corky. The second fish did the same thing which indicated that they were really hungry or that there were a lot of them competing for the same meal. I think it was a little of both for about thirty minutes.

I hit three or four similar spots on the way back and never got the first strike. Two days later I very nearly waited too long before discovering that the trout had moved less than a hundred yards down the same non-descript stretch of shoreline.

I actually found those fish drifting a GULP curly tail under a cork in hopes of catching a red or two. When I caught the first trout I switched over to the Corky and for some reason they wanted the Devil more than the Fat Boy.

I haven't been back since, but I have no doubt that same program is still working. I never saw any bait on the surface and the fact that they were holding over no particular structure makes locating them a challenge. You just have to believe the fish are there and keep covering water.Ignore the clarity as it will do little for your confidence!

Rusty Frederick and his daughters, Madelyn and Olivia recently took advantage of one of our warmer afternoons and really did a number on some very nice redfish. "I had them drifting with a cork and they both won multiple tug of wars with some very nice fish," bragged their deservedly pumped Dad.

Rusty added that the reds were feeding in the same place he had been catching trout. "The trout may have been there as well, said Rusty, "but I quickly became the net boy and head cheerleader."

I knew Rusty and his Dad could fish with anybody, but it now looks like the females in the family have a gift for catching fish as well. Those are the kind of days your never forget.

I don't think that even this cold front will move the big bass on Toledo Bend. There are a lot of sows that have already moved into eight to twelve feet of water and I don't see the lake level falling enough to move them.

We got in less than six hours of fishing one day last week and still got some swings at some very nice fish. I caught nothing over six pounds, but my host got a "sure enough" double digit fish to the surface and managed to boat another in the eight pound class.

He had been catching all of his fish on a three eighths-ounce black, blue and brown jig, but we caught every fish on a half-ounce single spin spinnerbait. Because there was no grass on his favorite spots, the slower fall seemed to help.

Hope I can give it another try in the very near future!