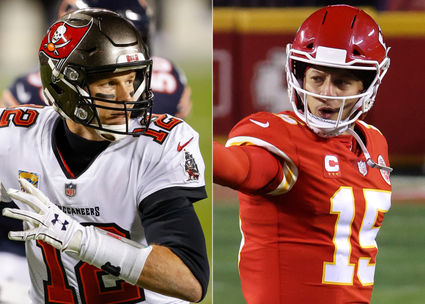 Sunday's Super Bowl LV at Tampa Bay will feature several historic firsts when the hosting Buccaneers meet the defending world champion Kansas City Chiefs in a game that kicks off a 5:30 p.m. on CBS.

Super Bowl LV will be the first to pit the quarterbacks who won the game in the two preceding seasons, according to this week's issue of USA Today Sports Weekly.

The quarterback match-up between Tampa Bay's Tom Brady, the 43-year-old GOAT, and the Chiefs' 25-year-old Patrick Mahomes, the kid and reigning Super Bowl MVP and surely the next face of the NFL, ought to be epic.

Mahomes was starting kindergarten whenever Brady was starting in his first of an NFL record 10 Super Bowls. The two have split four career meetings, though Brady prevailed in their only post-season match-up when New England won the AFC championship game in 2018, according to the article.

There is much controversy in the media as to which quarterback is the more important to his respective team. Brady has the most seasoning while Mahomes is the most versatile. Brady doesn't have nearly as much raw talent with which to work while Mahomes is surrounded by stars on offense.

Brady will become the first quarterback to participate in the Super Bowl in three different decades and the fourth to start for multiple teams. He joins Craig Morton (Dallas and Denver), Kurt Warner (Rams and Cardinals) and Peyton Manning (Colts and Denver). Only Manning led different franchises to Super Bowl wins.

Brady has started in a record 14 championship games, twice as many as the next man on the list-Joe Montana-and has won 10, according to the article.

In seven post-season starts, Mahomes has thrown 17 touchdown passes (three in the AFC championship game) with only two interceptions.

Tight end Travis Kelce and speedy wide receiver Tyreek Hill have both exceeded 100 receiving yards in each of the Chiefs playoff games this season.

Hill, reportedly the fastest NFL player with 4.27 speed in the 40, burned Tampa Bay cornerback Carlton Davis III for more than 269 yards and multiple touchdowns, doing most of the damage before the first quarter was over when the two teams met in Week 12 and the Chiefs won 27-24 at Tampa Bay. That was the last time the Buccaneers lost a game.

The Buccaneers' outside linebacker Shaquil Barrett (three) and Jason Pierre-Paul (two) combined for all five of Tampa Bays five sacks at Green Bay in the NFC championship game.

Tampa Bay's pass rush could also loom as a primary key to Sunday's game, especially since Chiefs' left tackle Eric Fisher suffered an Achilles injury that will probably keep him out of the Super Bowl.

Bucs' cornerback Sean Murphy-Bunting had only one interception in the regular season but has snatched an enemy's aerial in each of his first three playoff appearances-the first player to do so since Hall of Famer Ed Reed whose streak spanned three separate post-seasons.

Luke Easterling, of the Bucs Wire, wrote, "Brady continues to prove that betting against him is risky business, though Mahomes and Company will certainly give him the toughest of tests.

"Still, he's been in this situation more often than any other quarterback in league history, and the Bucs are talented enough to learn from their mistakes in Week 12 and get some revenge for the second time this post-season." He picks Tampa Bay 30-27.

Finally, the Chiefs will roll into Super Sunday on a five-game playoff winning streak. The last quarterback to beat them in the post-season-You guessed it-Tom Brady.

However, with wife Susan and her large clan of McGraws all being from Missouri, I'd be foolish not to predict a 38-31 Kansas City victory Sunday in Super Bowl 55 even though they are favored by only a field goal!!!

KWICKIES...Major League Baseball last weekend proposed to the players union a 154-game regular season with a one-month delay to spring training. The league's proposal, first reported by Yahoo Sports, includes a full 162-game pay for players, an expanded 14-team post-season and universal use of the designated hitter. MLB would also keep last season's experimental rules for seven-inning doubleheaders and beginning extra innings with a runner on second base.

Patrick Reed of the Woodlands ran away with last weekend's PGA Tour Farmers Insurance Open at Torrey Pines by five strokes. It was the burly golfer's ninth PGA Tour win.

The fact that longtime NFL assistant coach David Culley was named last week as the new head coach of the Houston Texans, didn't make controversial quarterback Deshaun Watson change his mind about wanting to be traded to either the New York Jets or the Miami Dolphins.

JUST BETWEEN US...On Monday morning's First Take show on ESPN, Adam Schefter predicted that there will be at least 18 NFL teams changing quarterbacks for the 2021 season. Houston fans are hoping the Texans aren't one of them based on the growing controversy between the front office and starting quarterback Deshaun Watson, who says he wants to be traded. And speaking of trades, a blockbuster occurred last weekend when the Detroit Lions traded longtime starting 33-year-old quarterback Matthew Stafford to the Los Angeles Rams for their starting quarterback, 25-year-old Jared Goff, the first-round pick in both the 2022 and 2023 drafts and a third-round pick in April's 2021 draft. The Rams believe Stafford will lead them to a Super Bowl victory next season, while the Lions have some great material with which to build a championship team.