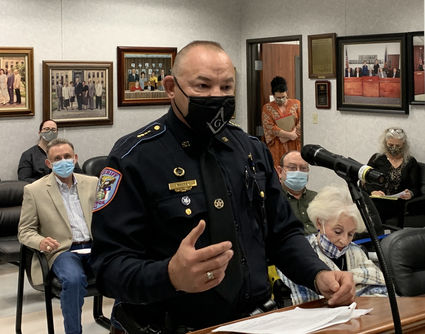 The Orange County Sheriff's Office is going for the dogs.

The purchase and training will require the expenditure of $20,000 of drug forfeiture funds from the Sheriff's Office plus $10,000 of county money to pay expenses for two dog handlers.

"The Drug Enforcement Administration requires us to use a K-9 anytime we seize currency," Sheriff Lane Mooney explained.

"If we call others in [a K-9 unit from another police or sheriff's department], we have to share with them."

According to a report presented by former Sheriff Keith Merritt last year, the department seized more than $1.25 million in cash from traffic stops and search warrants in 2019.

Those funds are turned over to the U.S. Treasury, which eventually returns most of the seized money to the agency that discovered it. Forfeiture funds are restricted in that they can only be used for certain law enforcement purchases.

The dogs are trained to sniff out contraband and are used on highway interdiction.

K-9 expenses were hardly the largest of the day, though.

Commissioners approved a total of $2.03 million in weekly bills, one of the largest totals in memory.

Plessala Enterprises got a check for $463,911 for use of its landfill. TetraTech, the company hired to satisfy FEMA-required oversight of debris-hauling trucks, was paid $434,306.

The county jail, which suffered heavy wind damage in October from Hurricane Delta, earned a Certificate of Compliance after a surprise inspection by the Texas Commission on Jail Standards Jan. 20.

Commissioners deliberated the best way to pay for $664,000 of capital expenditures by the Road & Bridge Division, and sent County Engineer Clark Slacum back to get a quote on a three-year financing agreement.

The county leaders noted that they had not yet received any of the $10 million reimbursement promised by FEMA for debris cleanup and cash flow was a concern.

Mauriceville Heritage Association was granted a one-time $30,000 grant from county Hotel Occupancy Tax funds. The Association's buildings were lost to winds from Laura and Delta, but the county's money is to be used for other costs.