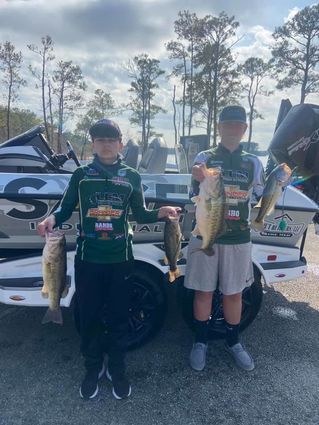 The LCM bass club took advantage of the ideal conditions last weekend and again dominated the top ten in the second of five SETX High School events. While Toledo Bend continues to garner most of the attention lately, you will have to excuse the bears for being in no hurry to leave Rayburn!

The next event is scheduled for Feb.20th on Toledo Bend followed by the final two back on Rayburn.Championship Weekend is set for May 1st and 2nd on Rayburn.

"Had I known the Super Bowl was going to be so crummy," I'd have waited to come home Monday night," moaned Allen Johnson."I had my way with the bass for two days and my daughter and son-in-law caught the heck out of the crappie.They didn't have any of the slabs I'd been hearing about,

but they had 22 nice keepers the first evening and 31 the day after."

"We didn't catch any big bass, but that was probably my fault," said Allen."I know what you have to do to catch them, but we were catching so many solid bass on Traps and a spoon bill Rebel that we just never switched gears!"

He added that their best bite was in the late afternoon in four to six feet of water."The bite was a little deeper most of the day, but they would head to the shallows in the evening.Sexy shad and gold-black back were the only two colors we tried."

I remain surprised that at least some of the crappie are already spawning, but I have gotten several reports from folks I trust. Hands down, the best bite has been on shiners fished two to three feet under a cork."Lawson tried several colors in curly tail jigs both days after running out of shiners," said Allen, "and never got the first strike."

Anne Peet will not soon forget Super Bowl weekend as she caught and released the largest bass of her long fishing career. Anne's fish hit a Carolina rigged watermelon craw worm in fourteen feet of water. "I guess I've just been trying too hard all these years," she surmised."I wasn't even holding my rod when it hit.I was digging around for my cell phone and I saw the line move side-ways."

Her bass weighed 9.20-pounds. "I've been fishing Cow Creek for forty years and never caught a bass over three-pounds," said Anne. "My stretch of the creek is almost impossible to fish now so we have been driving up to Indian Creek once or twice a month.It's fun, but there's no wading up

There was, however, some successful wading taking place on Sabine Lake over the weekend.Two groups I talked with took advantage of a big outgoing tide and just hammered trout up to three pounds.

The waders I spoke with that fished the main lake caught their trout swimming red shad five-inch Assassins in three to five feet of water.They also picked up a few solid reds, but caught and released 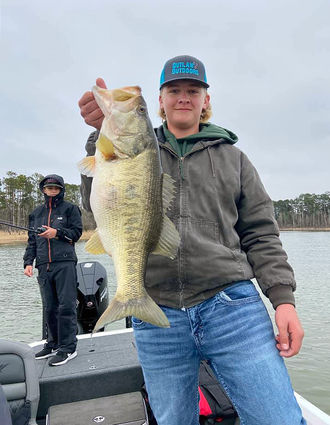 Easily the most encouraging report came via two Beaumont anglers. They were in no hurry to draw a map or post GPS numbers, but they did share one very important piece of information.

Both anglers said that they had never waded the Intracoastal side of the islands, but that may have been a mistake.It will take another successful trip to bear that out, but they caught at least thirty trout doing just that Saturday afternoon.They caught every fish on a lime colored Corky Fat Boy.

The only thing still missing are the trophy sows we took for granted for years. Reduced limits and lighter fishing pressure has obviously helped our trout rebound quicker than expected and we might just be in the process of growing another generation of bragging-size specks!