County thaws out from deep freezes 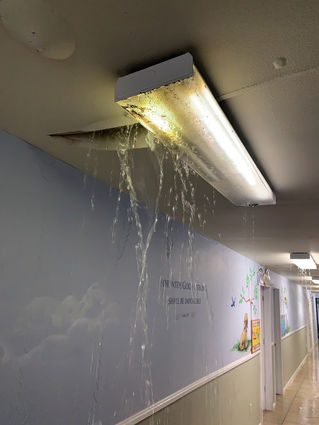 But the owner of Childs Ace Hardware and Building Supplies didn't have time to speak on the phone with a reporter because he was too busy dealing with his customers' plumbing emergencies.

"We have been swamped," said the employee who tried to forward the call.

Severe Winter Weather Events Uri and Viola were not kind to Texas, subjecting the state to several days of freezing temperatures, which led to power and water system outages.

But a survey of Orange County this week finds the area's hardy residents came through it better than might be expected.

"I really want to thank the citizens of Orange for being so caring for the city of Orange and not just the city of Orange with all these gripes and complaints, like they did in other places," Orange city councilman Patrick Pullen said at Tuesday night's council meeting.

The members of the First Baptist Church of Bridge City had to deal with burst pipes in the ceiling of their Sunday School building.

"This was upstairs. We didn't have a chance," pastor Keith Royal said of Thursday's building flood. "It's a big repair, but right now we've got a remediation crew in there getting it dried out."

Sherry Combs, community relations coordinator for Little Cypress-Mauriceville's school district, said her district had burst pipes in most all of its buildings, but the district's maintenance department worked quickly to make repairs.

But LCM, like all Orange County districts, welcomed its students back to class as scheduled this week after a chilly week of "snow days."

Shaun McAlpin, Orangefield superintendent, said the most expensive item in his district's $20,000 of damages was a large canopy that collapsed under the weight of snow and ice.

"We seemed to have dodged a bullet."

But Vine knows that not all of his citizens escaped harm and he warned residents to be wary of fly-by-night scammers.

"Don't ever pay somebody before the work is done," he said.

Vine, whose job also involves code enforcement, reminded citizens that they are supposed to pull a permit from the city if the home their working on is their homestead.

Permits are free when it comes to storms, Vine said.

Orange County is asking its residents to go to its website or the "Orange County Emergency Management" page on Facebook to self-report storm damage. Doing so will help the county press the case for federal and state reimbursement if enough damages are not covered by insurance.

And those who need extra help can find links to Orange County Disaster Rebuild and other resources.

"So far we've had only 36 people register their damage," Joel Ardoin, emergency management coordinator for the county, said at Tuesday's Commissioners Court meeting.

"I don't think the damage was widespread like the 1997 ice storm. I think the biggest losses we'll have is from the water utilities being down a while."

The county had to cancel COVID-19 vaccination clinics because of frozen roadways last week but has resumed its evening clinics, aiming to give 1,500-plus doses this week.

For the third week in a row, thanks to teaming with four other Southeast Texas counties to form a hub, Orange County is receiving 1500 doses of COVID-19 vaccine.

"We survived another disaster," County Judge John Gothia said Tuesday during a county meeting that included updates on the ongoing federal reimbursements and local rebuilding from Hurricane Harvey in 2017, Hurricane Laura in August, the COVID-19 pandemic that began a year ago. "I hope everybody did OK."

"We are the masters of disasters," Commissioner Johnny Trahan said.