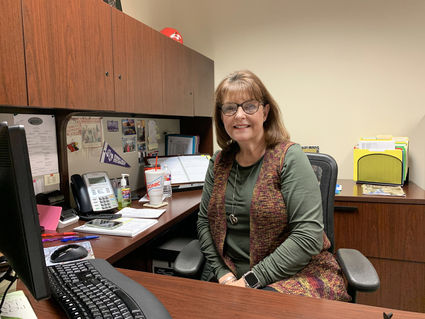 Patty Collins is running for a second term on the Bridge City school board but hardly considers herself a politician.

She's just continuing a career of service to education: Her day job is Executive Director of College Affairs for Lamar State College Orange.

"The fringe of politics. That's what I call the school board," she said. "I never really had a desire to be in politics, but I love serving our district."

BCISD stakeholders will go to the polls May 1 to decide two races. Collins is running against Paul Zoch for Place 1 while Judy Cole, another incumbent, is on the ballot along with Caleb Hayes for Place 2. BCISD board members serve for a three-year term.

"We have a full slate of contested races this year, so this will be a busy couple of months,"

Not that she hasn't always stayed busy with a career spent in professional and leadership positions. Collins, a Bridge City high school alum, was active assisting her hometown schools for many years before joining its school board in 2017.

"I have a servant heart and I felt called to serve," she explained. "I felt like the school district was the best place to start serving."

With a bachelor's degree in business administration from Stephen F. Austin State University and a master's of science in organizational development from Abilene Christian University, Collins has spent much of her life devoted to continuous learning. That was one reason she became a volunteer with Junior Achievement to provide their programs in Bridge City schools.

She was a member of several citizen committees under former schools superintendents Jamey Harrison and Mike King, including "Taking Stock" and facilities.

"I really took some time to get involved in the district before I ran for school board," Collins said. "When there was an open seat, I felt it was my time to run.

"Some might think you just show up once a month for a meeting, but being on the school board takes a lot of time and dedication."

The BCISD board is meeting three nights this week for first-round interviews with candidates to replace retiring superintendent Todd Lintzen. A search firm was hired by the board to assist in developing a list of candidates.

"I feel like Bridge City has a lot to offer," Collins said. "But one negative is that living on the coast, you have to deal with hurricanes. It's important to me that our next superintendent  understands the reality of a potential hurricane."

Everybody in the world is in their second year of dealing with another more deadly disaster, the coronavirus pandemic.

"Our district has done a great job administering COVID-19 safety protocols," Collins said. "That keeps the numbers down and students stay in school. The school district COVID-19 dashboard is very good."

Among Collins' duties at LSCO is campus COVID-19 coordinator.

"Between keeping up with the CDC guidelines, the state guidelines and the county guidelines, it's a challenge," she said. "But we're doing very well on our campus."

Collins is Title IX coordinator at LSCO, which includes promoting awareness of and investigation of complaints of sexual misconduct on campus. She's also the school's emergency and risk management coordinator.

Before moving to LSCO four years ago, she spent 21 years at Industrial Safety Training Council (ISTC), where she was vice president of operations/human resources. She was general manager for Magnum Fire & Safety Systems before that.

She is an active member at Bridge City's St. Paul United Methodist Church, which her grandmother, Della Collins, helped found.

When she gets the time, Collins loves the beach.

"I feel at complete peace when I can listen to the waves and feel the sand between my toes," she said.

"I love spending time with my family, including my two beautiful grandchildren and my four-legged fur-baby Abigail."