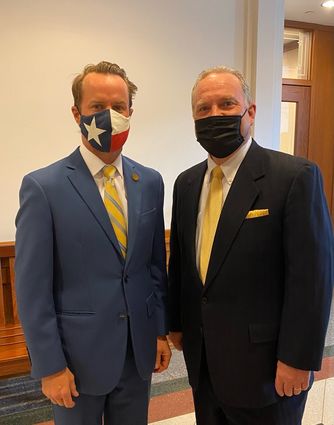 Texas House Speaker Dade Phelan visits with Dr. Tom Johnson, Lamar State College Orange president, during Johnson's visit to the Capitol in Austin, where he reported last week on the school's progress and plans for the future to the Senate Finance Committee. Tuesday, Johnson had a virtual meeting with the Texas House Appropriations Committee, a routine happening for all state-funded schools.

Texas House Speaker Dade Phelan visits with Dr. Tom Johnson, Lamar State College Orange president, during Johnson's visit to the Capitol in Austin, where he reported last week on the school's progress and plans for the future to the Senate Finance Committee. Tuesday, Johnson had a virtual meeting with the Texas House Appropriations Committee, a routine happening for all state-funded schools.

The President of the two-year school in downtown Orange had just wrapped up his second day in a week pointing out the school's successes to members of the Texas Legislature, when he mentioned to a visitor that the school had begun 2021 by sending two groups of students to national championship competitions.

A lot of people had heard about the school's two-year-old bass fishing team, which is competing in its second national tournament this weekend.

But whatever success the two two-man teams of anglers have this weekend at the FLW National Collegiate Championships in Oklahoma, Lamar State Orange has already scored a seventh-place in a different kind of national championship.

"I'm really proud of these guys," Johnson said, speaking for both teams. "You've got to admit for a little school this year to have two teams in national tournaments, things are good."

The Gators' Jack Tindel and Brett Fregia finished seventh nationally in the Bassmaster College Nationals held in late 2020. They are joining classmates Trent Buchholz and Grady Doucet at the FLW Nationals.

Johnson's visit to Austin last week included late-night testimony as to the resilience of LSCO to maintain enrollment and student success during the pandemic and multiple hurricanes.

The night began with Brian McCall, Chancellor of the Texas State University System, then each president of the system's schools laid out their vision for the next two years.

Johnson told how LSCO's students, faculty and staff endured, in little more than a year, the aftermaths of Hurricane Harvey, Tropical Storm Imelda, the pandemic, then Hurricanes Laura and Delta in a six-week period.

He requested funds to develop an Industrial Technology Academy and make hurricane-related repairs on campus.

This week, he was in Port Arthur, joining Lamar State College Port Arthur President Dr. Betty Reynard in a virtual hookup to Austin with the House Appropriations Committee.

"It was the same exact thing today," he said of his testimony.

Johnson said his requests of the legislators who create the state budget every two years came in four parts:

"No. 1 is parity," he said of Lamar State schools not having access to local taxpayer funds like schools that have community college taxing districts. The 2019 legislature delivered parity funding.

"That allowed us to bring down tuition 25 percent. It was so successful in that enrollment went up and it was good for the community, we asked them to do it again."

Second on the list is money for repairing storm damage and a $1.5 million natural gas generator to help maintain operations during and after any future storms.

Third is $1.5 million to build an Industrial Technology Academy to create a learning space for dual credit students and others to develop a trade or craft.

Finally, Johnson's funding requests included a $40 million tuition revenue bond to build a new state of the art Academic Building to replace the current one, which was built in 1908.