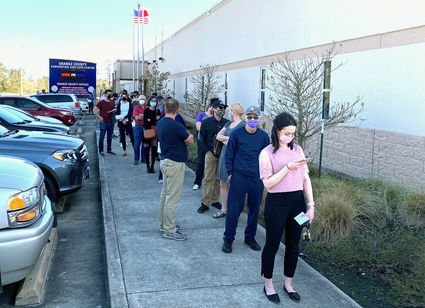 The Orange County Convention and Expo Center set a record Monday when it played host to 650 COVID-19 vaccinations.

Then it broke the record Tuesday.

"I can't say yet exactly how many we saw today, but it was the most ever," a woman working the door said.

Last Friday, Orange County Judge John Gothia announced the county vaccine center would be available to all age groups, rather than only the 65-and-over bracket.

"Priority is still given to anyone 65 years of age or older that calls in," Gothia said. "We want to make sure we continue to take care of those people.

"But we weren't getting enough response from that group, fast enough."

Gothia reminded you first need to register for the vaccine list by going online at vaccine.beaumonttexas.gov, or by phone at 409-550-2536.

"If you can't get through on your first call, call it again until you do," Gothia said, noting it might take several calls.

The next key step is to answer the phone when a scheduler calls you back. The judge noted many people have quit answering phone calls from numbers they don't recognize, a mistake if you're waiting to hear from a scheduler.

Jefferson County, Hardin County, Orange County, Jasper and Newton County combined efforts to win 11,000 doses per week in vaccines from the state of Texas. Orange County is currently receiving 1,500 vaccinations per week from that allotment.

"I'm not going to lose our state allocation. We fought too hard to get it, so we opened it up."

Late Tuesday afternoon the line to get in the ballroom doors at the north end of the Expo Center began at the southeast corner of the building.

And while it moved quickly, once inside the ballroom, the line snaked back and forth before arriving at one of four vaccination stations where the needle met the flesh -- painlessly for most. 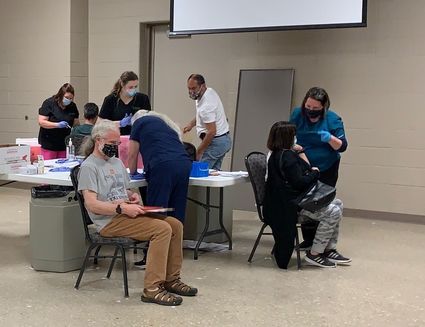 The people in Tuesday afternoon's line seemed to be split almost evenly between those in their 20s and 30s and those 65 and over.

"We want to make sure that we get as many shots in the arm as possible to our East Texas citizens. That's our goal."

The judge noted that all of Orange County's school teachers wanting a vaccine had received one, as well as people in commercial nursing homes.

But because of staffing shortage, Gothia said he has to wait for the arrival of the newly approved Johnson & Johnson vaccine, which requires just one shot, not two, before sending nurses door to door for the homebound." "But we're not there yet," he said "To do homebound with two shots is very tough."