Down Life's Highway, The Dunn's of Eastland County 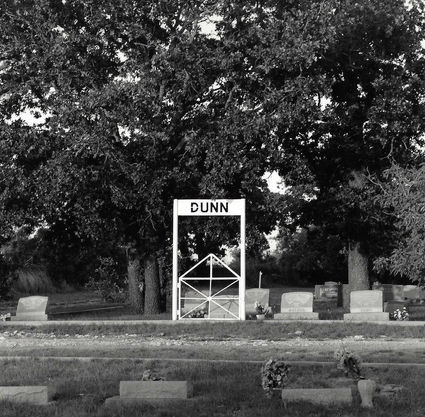 The Civil War had come to its conclusion. The year was 1865. Dr. Stephen Dunn had been one of its casualties. He was survived by his wife, Sarah Jane, and one eight year old son, Allen. Alone and penniless, the mother made a decision to take her young son and travel to Eastland County, Texas, where she had a brother.

Allen, his mother and an aunt traveled by covered wagon from Searcy, Arkansas. The trek took several months and they were met with many hardships and delays. They camped along the way where water and wild game could be obtained. One place they camped, where everything was plentiful - flowing springs, creeks and much grass for the stock, etc., became Allen’s home the latter part of his life but that is a story in itself.

When the Dunn’s, arrived in Eastland County the biggest fear that existed, was that of raiding Indian tribes.

Allen later married a local girl from Dublin - Laura, who also had the family name of Dunn. As far as I know, no kinship was ever connected among all these Dunn’s. Allen was a Dunn, his father was a Dunn, his mother was a Dunn and now his wife. My dad used to say all Dunn’s are kin.

Laura’s mother was a Blair, the daughter of C. C., for whom Ft. Blair at Desdemona, in Eastland County, was named. The fort was primarily one that patrolled for wild Indian renegades. They also fought to protect the white settlers from the raiding tribes. The fort was begun after Laura’s mother was captured by a handful of Indians. She was rescued; the fort continued for several years and a historical marker still marks the spot.

Laura and Allen raised a family consisting of eight kids, six boys and two girls; my dad Clay was the fifth born. Allen, at the age of 15, became a scout and Indian fighter.

Later, to provide for his young family, he became a trader and merchant of sorts. With a pair of oxen and a wagon he would travel the 400 miles to Galveston, where he carried furs and traded them for goods. The goods he brought back were sold once he got home.

The children, who attended school five miles away by horseback at Sipes Springs, remembered their father’s departure as a minimum trip taking three months. Often making two trips a year meant Allen was gone from his family at least half of the year. Many times, due to rivers being up, he would be delayed at the banks for several weeks.

Allen Dunn raised an intelligent and industrious group of children. Allen’s intelligence however was never surpassed by any of his offspring. He died at the age of 96 and to the very end he was still sought out for his advice because of his keen mind. I’m one of few living whose grandfather lived during the Civil War.

Laura contributed the strengths. She’d become a bride at the age of 14. She had her family while she was still fairly young. She’d taught every one of them perseverance. As far as I know, I’m the only remaining Dunn, along with my children, from those ancestors even though granddaughter Amber says her research shows some English among the Dunn’s. I suspect its Grandma Laura’s side of the family. The late King Dunn’s family, often referred to as the ‘Mauriceville Dunn’s,’ claim to be English. Judge David Dunn’s dad, Ponce, also claimed to be English. Granddad Allen was referred to as ‘Black Irish’ due to his dark-skin. Clay was very proud of being Irish. Ironically, the marker on his grave says he died March 17, actually a month after his death, Feb. 19, 1959.

For this St. Patrick’s Day, I thought I’d give you a glimpse at the Irish side of me. I’m not rightly sure what you get when you cross a full-blooded Irishman with a Cajun. Maybe it’s not unique, but it is certainly unusual. As far as I know, I’m one of a kind but I’m thankful to have been a part of and shared in both customs. They are two total extremes. Hopefully, my path is somewhere in the middle.

This week I get to celebrate my Irish side and a Happy St. Patrick’s Day to you, regardless of where your roots come from.